So I’m woefully underqualified to review Dead or Alive 5. But let’s just roll with it.

The Dead or Alive series is known for two things, countering and jiggle physics. With the last in mind, my original plan to review this game was to get a physicist friend of mine to sit in with me and comment on the “realism” of the game’s “movement”. But health issues prevented her from participating (which given some of this game’s attitudes was probably for the best) so I got a bunch of friends with more fighting game experience than myself to help me out, given that the most fun to be had with fighting games is when playing against others.

It’s been six years since Dead or Alive 4 and series creator Tomonobu Itagaki has no involvement with this instalment, having departed from Team Ninja in 2008 believing that they had made the definitive fighting game with Dead or Alive 4. But you can’t keep a good franchise down, so Tecmo Koei and Team Ninja have continued the series and the “story” in Dead or Alive 5.

The opening scene transports the Dead or Alive franchise into the “Realistically Brown” colour palette of Modern Warfare territory, as Bayman and a team of mercenaries patrol some nameless urban warzone before being attacked by something. At the same time in New York, DJ and “fighting genius” Zack (by far one of my fellow players’ favourite characters, if only for his victory “BAM BAM BAM!” with Usain Bolt pose) is putting newcomer MMA fighter Mila through her paces. Days later, Bayman is recovering onboard new DOATEC CEO Helena Douglas’ ship Freedom Survivor and making his report when Mugen Tenshen ninja Kasumi bursts into Helena’s office demanding to know where her clone is… 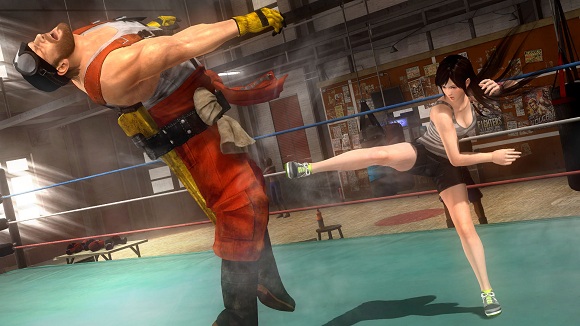 It was at this point I realised that the story here is a goddamn soap opera of a quality normally associated with bad Mexican telenovelas. At least this explains the static facial animations; like any other soap opera in its 16th year, the returning cast members need a lot of botox to look youthful at the cost of facial expression. I won’t torture you with further details of the story, sufficed to say that it follows each of the characters in various chapters that are presented brokenly in a series of disjointed cut scenes preceding a majority of pointless fight scenes from a narrative perspective. Little of the story is actually about the titular Dead or Alive tournament, rather it’s more about the melodrama associated with the potential entrants before going completely off the rails into a nonsensical bio-weapons arms race direction that screams more of Hideo Kojima’s Metal Gear series more than anything else. As a newcomer, I wasn’t impressed.

As bad as it is, the story mode here is essential for the control tutorials that are presented at the beginning of each stage. These tutorials are extremely useful for new players, as the controls feel counter intuitive.

But as bad as the story and its presentation was, what really irked me about the story mode was the objectification of women. Sadly that’s nothing new in this series, though I was under the impression that Team Ninja were going to tone down the Jiggle Physics that has been one of the major selling points. Maybe they have, it’s still comedic and distracting, and let me reassure the younger male readers out there that breasts don’t do that, nor would you want them to, especially on a fighter. But it was the defeat animations that were the rudest shock. Whenever a character is defeated in the story mode, they are left breathing heavily on the ground and looking vulnerable until the player presses continue, which is a delayed option. While the male characters just look beaten, they’re clearly trying to play up the sex appeal of the female characters in these moments in a most disturbing fashion. I shudder to think of the mouth breathers this sort of thing appeals to, but given the flak the gaming industry and its predominantly male player base have taken regarding its treatment and objectification of women, particularly over the past year, we don’t need this sort of stuff in our games anymore.

There are other single player modes such as training, arcade, timing and survival modes, but the true object for fighting games is player versus player, and that is a crowd pleaser, particularly the tag team matches and the different strategies that come into play as opposed to one on one matches. Character continuity is a nice touch in the tag team matches, where characters who have a relationship within the story acknowledge that in subtle ways when partnered together. 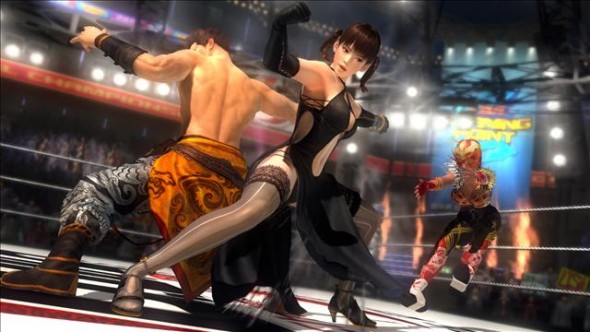 Unfortunately the biggest downside in the multiplayer aspect is the controls. Dead or Alive 5 utilises the same “triangle” system of strikes, throws and holds in a priority system reminiscent of “Rock, Paper, Scissors.” Strikes and throws are pretty easy, and in most cases speed over power is key when choosing characters. However, none of the players that helped me put this game through its paces could adequately use the holds, despite tutorials and training matches. Perfect timing is required, and we found more success with button mashing than any other strategy here. A veteran Dead or Alive player may have better luck here, but we found the controls unresponsive more often than not, even when training with other players.

Rounding out the multiplayer is an online mode which is a welcome feature. An online pass is required which comes free with the game, and connectivity seems relatively easy. Unsurprisingly, there is some lag in movements and responses when the connection of either player is low.

Look and sound wise, Dead or Alive 5 is good. The various arenas look gorgeous, and each has their different strategies and destructible scenery. The character models look the part for a fighting game of this type, though the characters look somewhat similar on the part of some of the females regarding body and facial structure. But at least you can put some of them in sensible clothes for fighting. The soundtrack is suitably boisterous, but the sound design feels somewhat repetitive after a while.

Dead or Alive 5 is a competent fighting game dragged down by a needlessly juvenile aesthetic and a steep learning curve for newcomers but has a high amount of polish overall. If you’re an aficionado of fighting games or the Dead or Alive franchise, you know what you’re getting. The game scores a 7 out of 10.