Far Cry 3 is a deep, violent and drug-fuelled venture into a lush, tropical island with an unforgiving and dominant underworld. Aside from Rook Island’s dark pretences, you play how you want to play, do exactly what you want to do and as a result your experience will be entirely unique. You can fight your way through the main quest armed with the weapon of your choosing, or maybe explore ancient ruins, dive into mysterious caves, tackle bullsharks or walk among locals. Rook Island is yours – well, aside from the pirates, madmen and an inescapable principle of violence.

The game’s main story follows the struggle of Jason Brody, whose 5 closest friends have been kidnapped for slavery mid-way through their drunken getaway on the unrelenting island. You play as Jason, who is magnificently voiced by Gianpaolo Venuta, and during the course of the game you will escape from burning buildings, shoot down cars atop a turret, snipe men trying to capture your friends and burn down drug fields just to get them back. Jason’s sole motivation to be the hero is a little dry, but watching him evolve from a simple American teenager who winces watching his brother murder someone to a trained killer is nothing short of magnificent. Whilst Jason’s friends are fairly 2D and annoying, the outstanding diversity in missions and the sheer unpredictability of the island and the islanders make the campaign hugely addictive. It never once feels repetitive or tedious – in fact, it’s one of the most diverse, deep and genuinely enjoyable campaigns I have played in a long, long time.

You encounter Vaas, the man trying to sell your friends and head of the pirate gang, as soon as you start the game. He pops up throughout the campaign, growing more and more frustrated with your interference in his slavery trade. He’s an exceptionally nuanced character – one minute he’s characteristically talking quickly and quietly about how much of a pain you are and it’s amusing. But then he snaps, and in an instant this previously amusing banter becomes terrifying. Then there’s his boss, Hoyt, who is said to be the source of all evil on the island – a man with no regard for anything but money. Every single character, aside from Jason’s friends, is so, so carefully thought out and unpredictable. The character profiles are absolutely outstanding in their realism, though they’re totally foreign. Before you jump at the opportunity to learn more about the seriously intriguing psychopaths thriving off of human misery, though, you’re taught the fundamentals you need to survive. 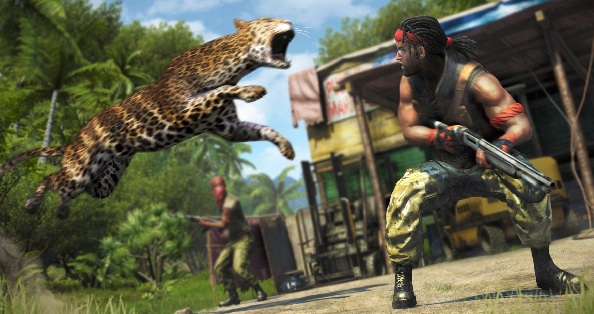 Jungle lovin’. Even beasties need a hug now and then.

The native Rakyat tribe takes you in and teaches you the way of the tattau – which is, essentially, the level up system. You gain skill points as you gain XP, which will come about depending on the way you choose to kill people. Points can be spent on the various sets of skills that focus on movement, speed, health and involve new killing styles. You’ll actually look forward to using them all too, since the jungle is so dense and full of vicious wildlife and experiences that make you think “damn, I wish I had that skill!” are around every corner. The biggest flaw is that they’re all far too easy to get – skills are incredibly easy to unlock and along with that, money and an obscene amount of firepower is practically thrown at you from the beginning.

You’re also quickly taught to climb towers to reveal more of the map, invade enemy outposts to gain more fast travel locations, hunt, craft and scavenge before actually firing a weapon. You’ll need to hunt and skin certain kinds of animals to be able to craft a bigger pack, ammo belt or wallet, but the actual crafting itself only takes the press of a button once you have those materials. It’s not at all rewarding, but you will quite quickly need upgrades in space, so crafting becomes a fairly important mechanic and every single animal on Rook Island serves a purpose as such. There’s nothing that isn’t worth scavenging or looting, and you’d be an idiot to pass up the opportunity if you ever come across a boar.

Travelling the island for supplies is incredibly fast and responsive. The movement itself is totally seamless. Jason can pull himself up on ledges, slide into cover, dive out of moving vehicles and swim through pristine waters with flawless ease. You can run over almost anything until Jason starts to slip up on slimy rocks, but even this can be used to your advantage to slide down declines. The huge array of land-vehicles themselves will drift on dirt, slide and struggle up hills and if you decide to bail out mid-way through a high-speed chase, you can watch whatever you abandoned pick up pace as it rolls downhill. Even the boats and jetski’s are a huge amount of fun to kick up water around the sandy coves, and luckily you can find them everywhere.

And after you’ve learned to take everything the island can give you – the theme of character progression and real core of the game comes in – Jason, the fearful kid from a pre-paid life starts to enjoy the killing. As the Rakyat’s accept him and his skills progressively upgrade, he starts raving about how “awesome” the chaos and destruction is. The change in his character is so slowly progressive that it’s completely believable and oddly relatable. He’s just a kid used to a life where everything is handed to him on a silver platter, thrown into a horror movie and forced to become a warrior – and the messed up part is that this kind of thing actually happens. It really does make you question; who would you be, and what would you do, if you were put into Jason Brody’s situation? 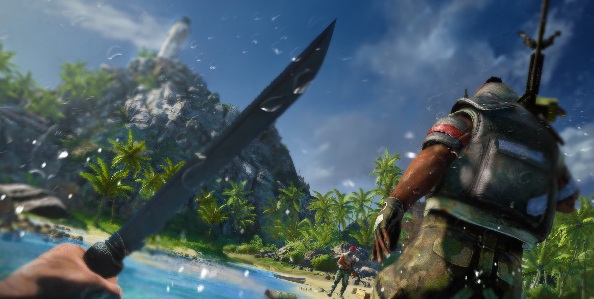 If you’re going to kill, you might as well do it in style, right?

Far Cry 3 as whole is only flawed in its issues with annoyingly perceptive AI, somewhat boring main characters and its multiplayer. The multiplayer is basically a set of structured missions with definite paths that only encourage running and shooting. The enemies are repetitive, the story is vapid and the range of characters is unfitting. It’s fun with a good friend, but lacks any depth whatsoever. I didn’t personally encounter any glitches during my time playing, but various sources claim it’s intolerably glitchy, too.

Minor issues aside, this game is outstanding in its desire to be wholly explored, its beautiful, dense scenery and the thrilling asylum of an underworld that constantly threatens your every move. The story takes you on a unique adventure of character, exploration, dominance and violence which are common themes, but it never, ever feels repetitive. Outside of that, time and weapons are yours. You can approach stealthily or go in guns blazing. There’s nothing like Assassin’s Creed 3’s big fat X’s if you don’t do exactly what it tells you – the only restrictions Ubisoft give you are their mechanics.

You don’t need to be a fan of FPS’ to enjoy this game, as it is so, so much more than those three letters imply. It is the best FPS I have ever played, and has one of the best in-game campaigns to date. If ‘open world’ were a genre, Far Cry 3 would top the list.