Jupiter’s Folly – Our thoughts and experiences #1

Recently, some members of the Save Game staff and our forums were given the opportunity to try their hand at Jupiter’s Folly – an online strategy board game from Iron Helmet Games. The game features mining. It features crystal. It features alien bugs intent on wiping out your security details and playing havoc with your mines. And thrown into all of this is the challenge of competing against other players who have similar goals and objectives as you. Over the next three days, we’ll be posting our experiences with the game, so that those of you unfamiliar with the game can get a feel for what type of experience it offers. First up is Griffon, who brings us up to speed on the game and gives us his opinion on how it all works.

Patience. If you wish to play Jupiter’s Folly in real time be prepared for a time expansive game that requires one to check in at least daily for over a week or more in order to manage the units and play on the field. That’s right; at the real time setting Jupiter’s Folly will take days to finish at the very least.

The point of Jupiter’s Folly is to harvest crystal from mines to a certain point level. In my game the goal was 5000 units. You start off with one mine and, depending on how many resource nodules are around the sector, that mine will harvest 1 to 3 units an hour. When it is full it will automatically be credited to your goal total. You will also start with a few units as well as 10 cards in your hand. The game is played based on a card system where you play cards to accomplish whatever action you wish on the field. These actions range from building new mines or units to levelling those units up to harvesting crystal immediately and many more actions. Each card has a dollar cost starting at 0 and up to at least 600 based on my personal experience. And each card also has a time refresh rate that can be as much as 48 hours… yes, I wasn’t kidding when I said patience was needed. 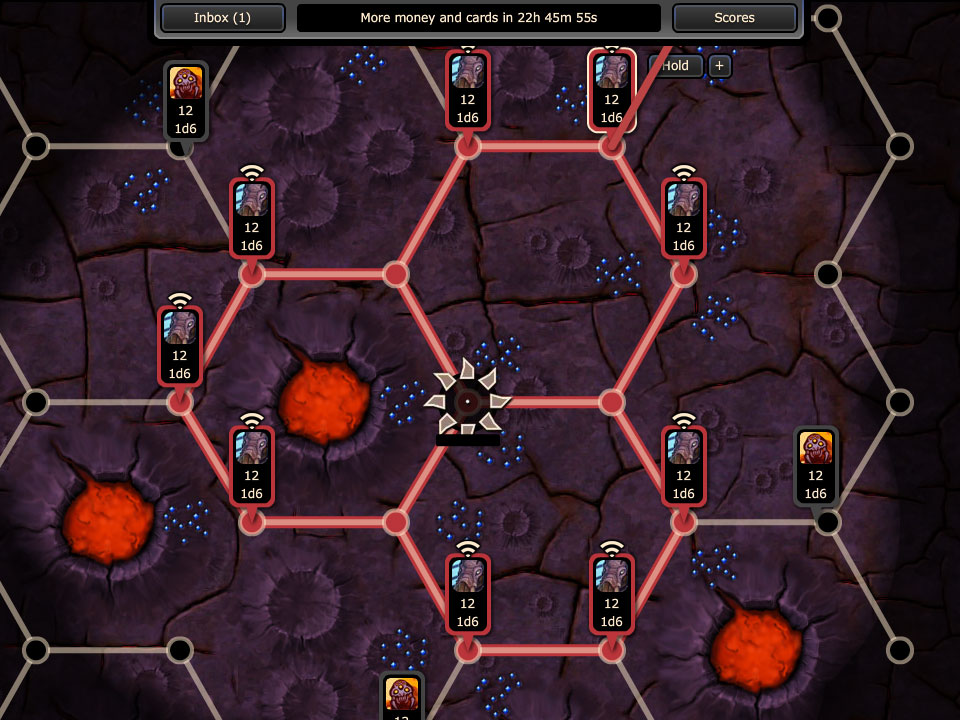 Now, the map is simple hexagonal segments with sectors at each point of the hexagon. You can move units along the edges of those segments, though again in real time it is a long process just to go along one single side. You can claim more territory as you move, though you will occasionally run into aliens or their nests as well as other players. At some sectors there will be resource nodules surrounding it and if you have the funds and the card, you may build a new mine at any sector with such nodules. Mines are built instantly. At any mine that you own, you may play cards to build new units. These cards take time to come into effect however, unlike building mines.

As stated, the goal of the game is to harvest so many units of crystal. But, you are playing against other players. Some might be AI controlled, but if you have enough people, you can play a full game against other players. Now, this doesn’t necessarily mean it is all warfare or such. You can use the diplomatic functions allowed in the game to trade cards and funds and to work together on some fronts. The end goal is to beat the other players, but it isn’t all about hostility. In fact, in my game I never attacked any other player… though a particularly nasty alien’s nest caused me lots of headaches instead.

However, the biggest challenge of the game isn’t diplomacy and really even isn’t harvesting the crystal, it is the simple fact you must be patient, disciplined, and willing to keep track of your actions as well as the actions of other players. This game is a game mostly of attrition. For instance, playing the first three days I had little interruptions that kept me away from routine check ins and was able to maintain a healthy position in the game along with the other players. However, after that point I had a few interruptions that sometimes kept me away for 12 hours or more and I had to play catch up several times and was never able to fully recover from one in which an alien nest ended up taking some of my units and interfering in a mine’s ability to harvest. I also noticed the loss of at least one of the fellow players due to inactivity as well. This game requires a level of dedication and patience that might not be possible at all times given people’s personal schedules.

In the end, the game offers a rather unique take on strategy and I find it intriguing to try and manage such tactics and actions over a longer stretch of real time gameplay. And, though I personally have not tried the mode out, there is supposedly an option to play the game at a faster pace or to pause the game at any time. How that works given the mechanics of the real time version I cannot say, but for those that might not have the ability to maintain a consistent presence to manage their game, it is probably a good option to try so you may enjoy the game as well. Even then I advise patience and discipline. This game is not for those seeking instant gratification.