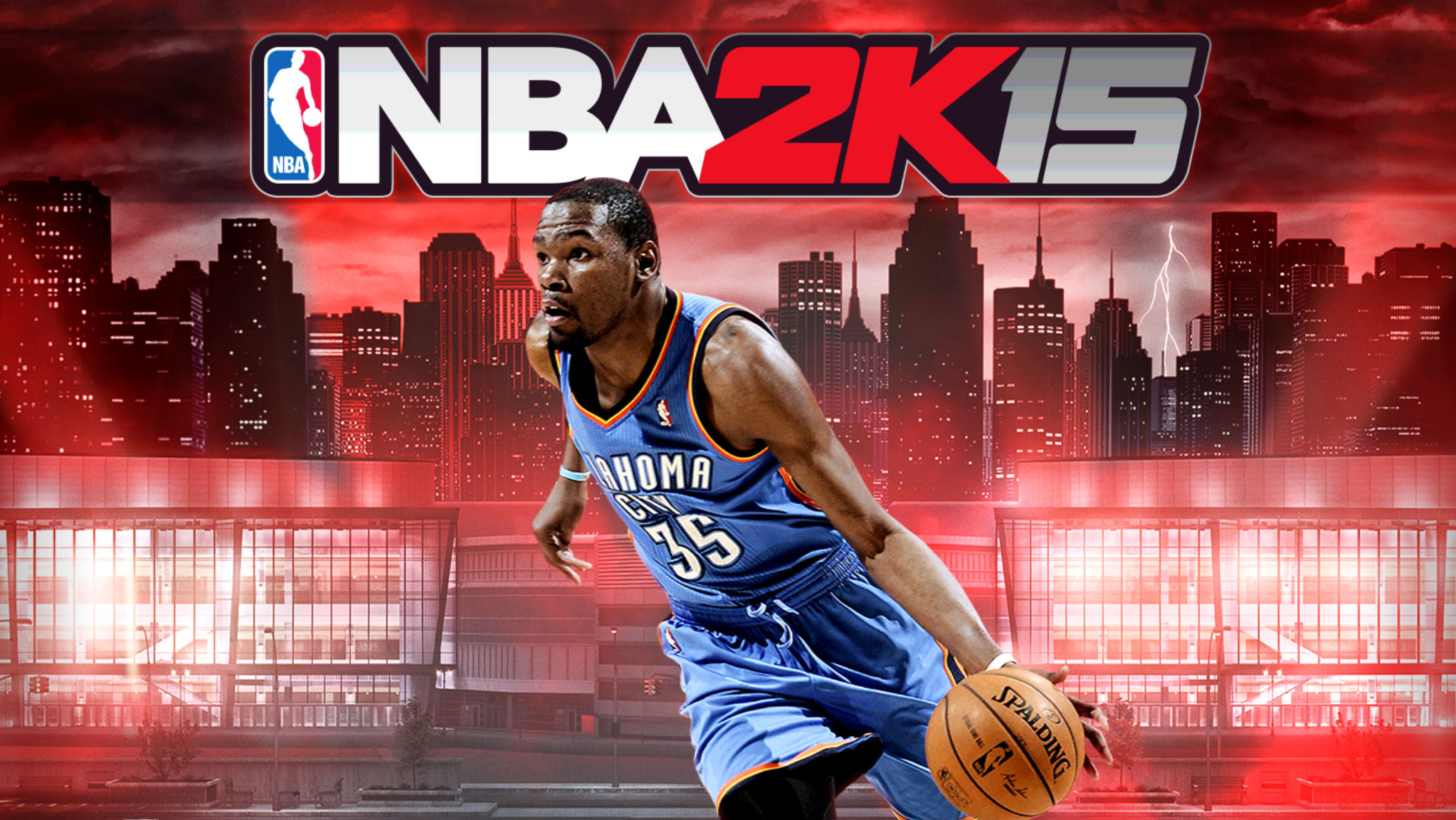 Basketball is a weird sport. I played it for ten years during school and while I learnt skills, no one taught me to be tall. Because my bright and shiny basketball career was tragically cut short, I now write, but thankfully for me and everyone else under 7ft, the latest instalment of Visual Concepts and 2K Games’ long running basketball series is out now.

NBA 2K15 follows on from 2K14’s mantra of “if it ain’t broke, don’t fix it,” and like Michael Jordan in the post-season, has decided to build upon its fundamentals, refining the player experience rather than completely overhauling the system. This can be a double-edged sword, offering the same experience in a different package, but in this case, you can see the developers are trying to push the franchise from elite level to legendary. 2K15, if anything, is about the one-percenters.

MyCareer, in particular, has had the most refinement to it, further stripping away the slower sections to give an enjoyable and engaging player experience. In it, you control a player from undrafted rookie to getting your first contract and aspiring to make the big time. I spent the most amount of time in MyCareer and found it to be by far the most enjoyable experience of the game. Each game played earns you Virtual Coin (VC) which can be used to upgrade player attributes and it’s an extremely rewarding feeling to watch your player go from somewhat lethargic rookie to superstar over time.

As you progress, you are challenged on- and off-court and choose how to respond either through on-court performance or a dialogue wheel. Perform poorly or respond incorrectly and your team chemistry and coach satisfaction goes down, affecting court time and the willingness of your teammates to play with you. Admittedly there are only ever two choices available in any given dialogue wheel and most are pretty obvious to their outcome, but it does add a level of authenticity to the game. 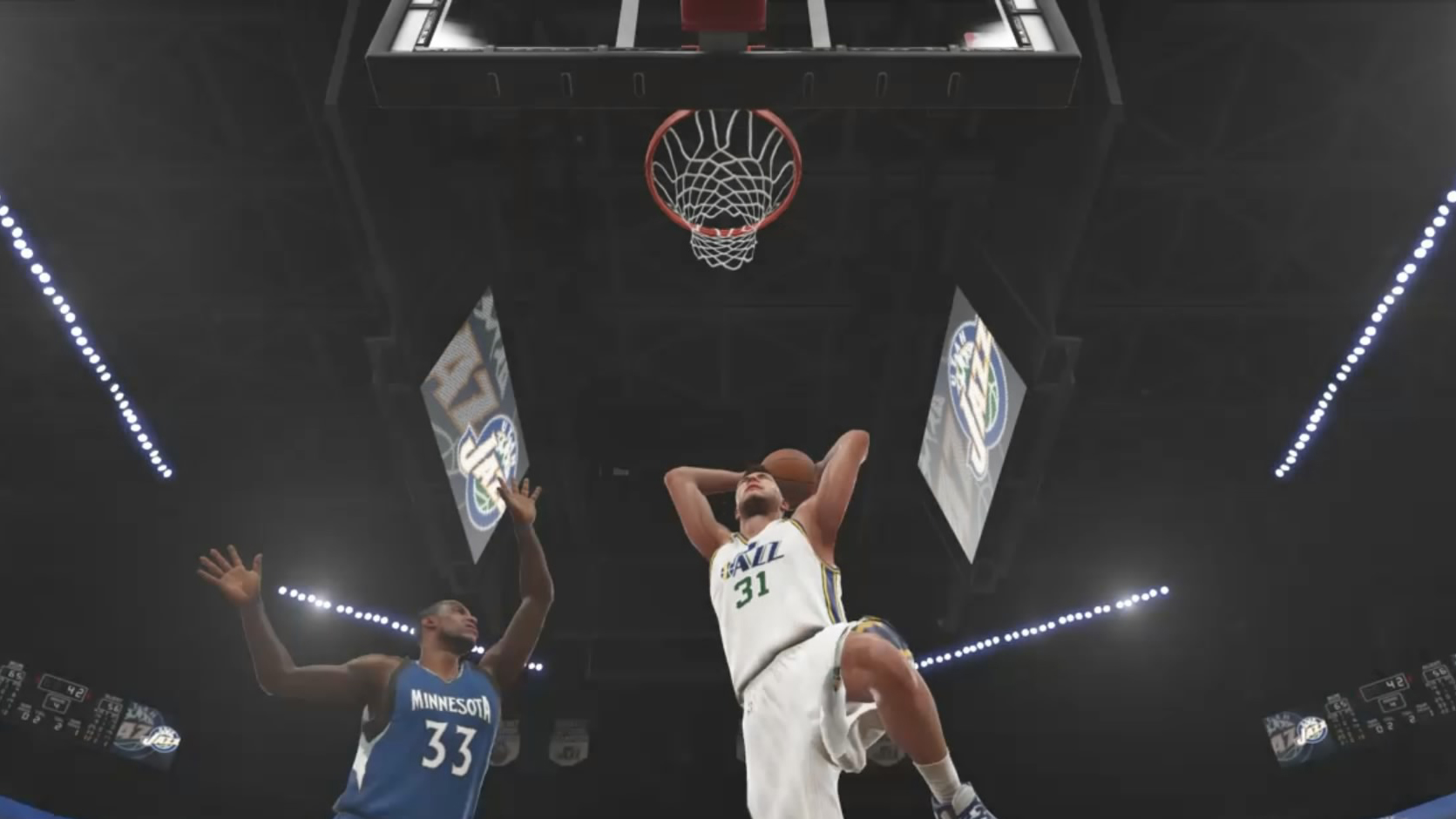 MyTeam lets you create your own legendary team. Part trading-card game, part fantasy basketball, MyTeam tries to emulate the luck of an NBA draft using card packs. As you beat game challenges you unlock new packs with new players, arenas, jerseys and coaches, letting you upgrade your team to complete other challenges. The mode is fun and there is already quite a large community around it, so if you’re interested in fantasy leagues, MyTeam may be up your alley.

The final mode, MyGM, is a franchise simulator in which you manage an NBA team to the big one over multiple seasons. Essentially a text based sim with excellent graphics, I found it difficult to get into it. Fans of the genre will really enjoy managing the day-to-day operations of a club and being immersed in everything from rosters through to merchandise sales, but I personally don’t have the head for it. More often than not, I found myself confused and bewildered at the sheer amount of decisions and choices available, though I can see for some players, this is a good thing.

On the technical side of things, it’s good to see the controls haven’t changed much. One of the biggest complaints about the franchise has been controls changing from year to year, affecting on-court performance. Controls remain fluid and nuanced to the player and the shot indicator allows you to get a feel for each player’s timing.

The tutorial system, however, has been replaced with videos. Apart from being fairly difficult to find in the menu section, the videos don’t allow you to get a feel for the intricacies of the controls and aren’t an effective way of teaching newcomers or refreshing the memories of franchise veterans.

Graphics are sharp if inconsistent at times, ranging from the masterly crafted and accurate representations of players; through to the hurriedly rendered, blocky drabness of the city and locker room areas during cut scenes; and back to the beautifully replicated courts and arenas during gameplay. What is most impressive is how well players have been reproduced. Lesser known players like Australia’s Patty Mills, Aron Baynes and Dante Exum (who is also featured in MyCareer!) look almost identical to their real-life counterparts.

Courts and arenas are true to their real life look and feel. Reactions of spectators and fans in the arena also liven up gameplay. Towards the end of a close game, spectators will erupt with every basket or turnover to the home team; while during a blowout loss, they will slowly shuffle out before the end, heads hung in shame. 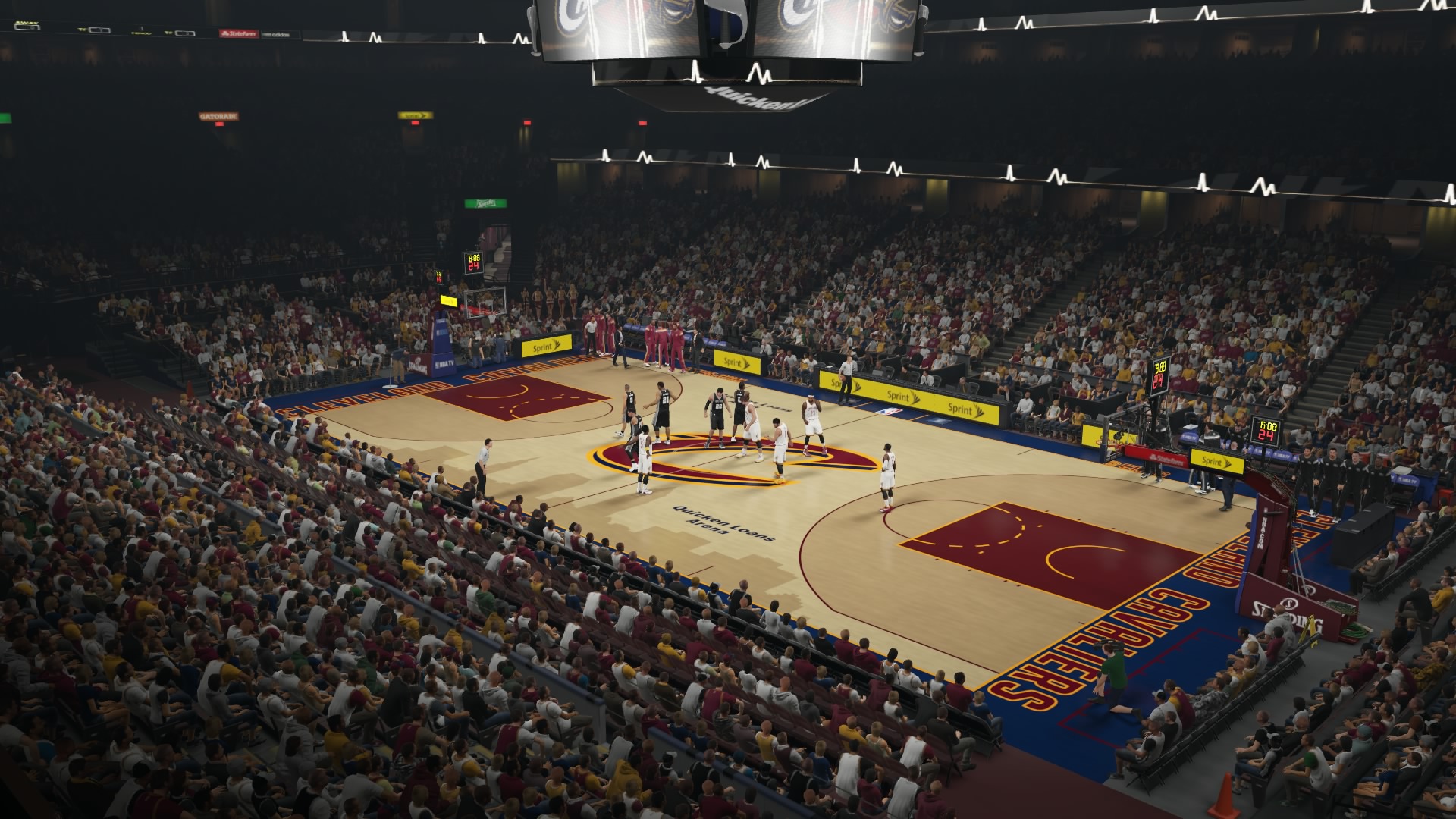 2K15 continues the tradition of faithfully reproducing television broadcasts and it’s in those moments that it really shines. Slowmo replay after a monster jam or perfectly executed assist showcase the smooth graphics. The commentary, provided by Kevin Harlan, Clark Kellogg and Steve Kerr (which is weird considering Kerr also appears in game as the Head Coach of the Golden State Warriors) is again insightful and very knowledgeable, as is regular sideline reporter Doris Burke.

The rest of the voice acting, however, is streaky. One of the marque updates for 2K15 is NBA players’ voicing themselves during MyCareer. On paper it may have seemed like a good idea, but in reality ends up sounding like confused players doing a first read of the script. Returning feature, mid-game and post-game interviews with players – known as real voices – doesn’t fare much better. The interviews are obviously lifted from television broadcasts and the difference between the clarity of Burke’s voice and the player’s is painfully jarring. 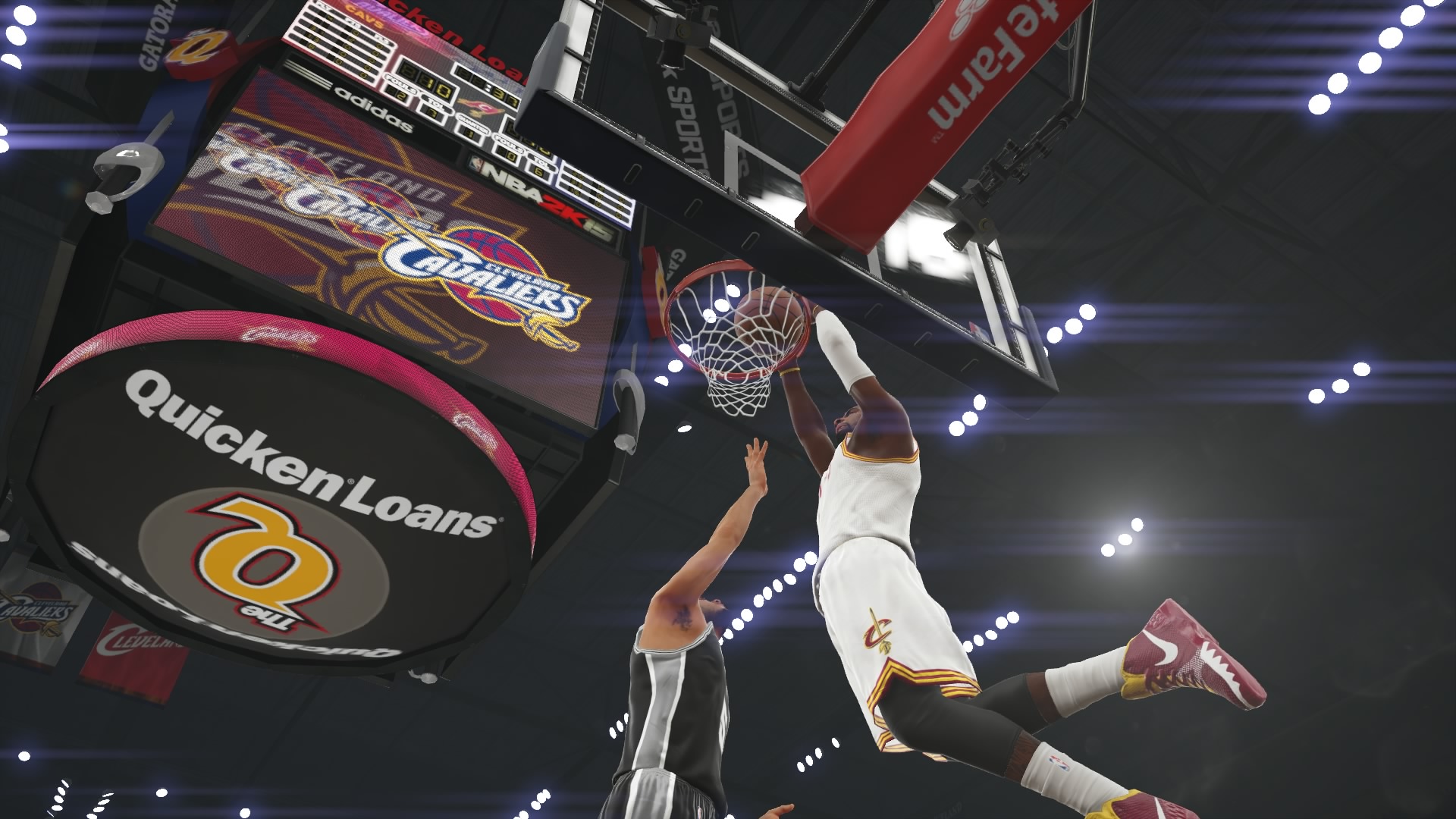 As previously mentioned, throughout the game you earn VC which can be used to upgrade MyCareer stats and wardrobe as well as purchase new cards in MyTeam. VC can also be bought as an in-game purchase, which doesn’t sit well with me. In the case of a game like 2K15, it’s a business model that’s trying to have it both ways.

As far as I can tell, your player, their wardrobe, your team and your GM aren’t transferable between each year’s game and nor should they, given players retire, teams change names, and so on and so forth from season to season. With the point of buying the latest edition being to get access to the latest roster updates and game extras (more on that later), I struggle to see the point in offering VC for purchase. 2K’s NBA franchise, and any other sports franchise for that matter, is not like other genre franchises like Assassin’s Creed, which offer markedly different storylines from game to game and therefore a level of replay value. If purchase of VC is meant to help players progress quicker than they would normally, it seems to defeat the purpose of having a difficulty curve in the first place.

Happily, 2K15 does provide opportunities to earn bonus VC and MyTeam cards through regular “Locker Codes” and a companion app, MyNBA2K15, for iOS and Android devices. A combination lucky-dip, tipping comp and card-based battle game, MyNBA2K15 is a handy, free extra to an already excellent game. I found myself spending a lot of time playing the Yu Gi Oh-esque battling game, MyTeam Mobile (not to be confused with and unrelated to the console’s MyTeam). With short games, the ability to train and enhance cards as well as a daily 500 VC bonus just for playing, MyTeam Mobile, is extremely addictive. 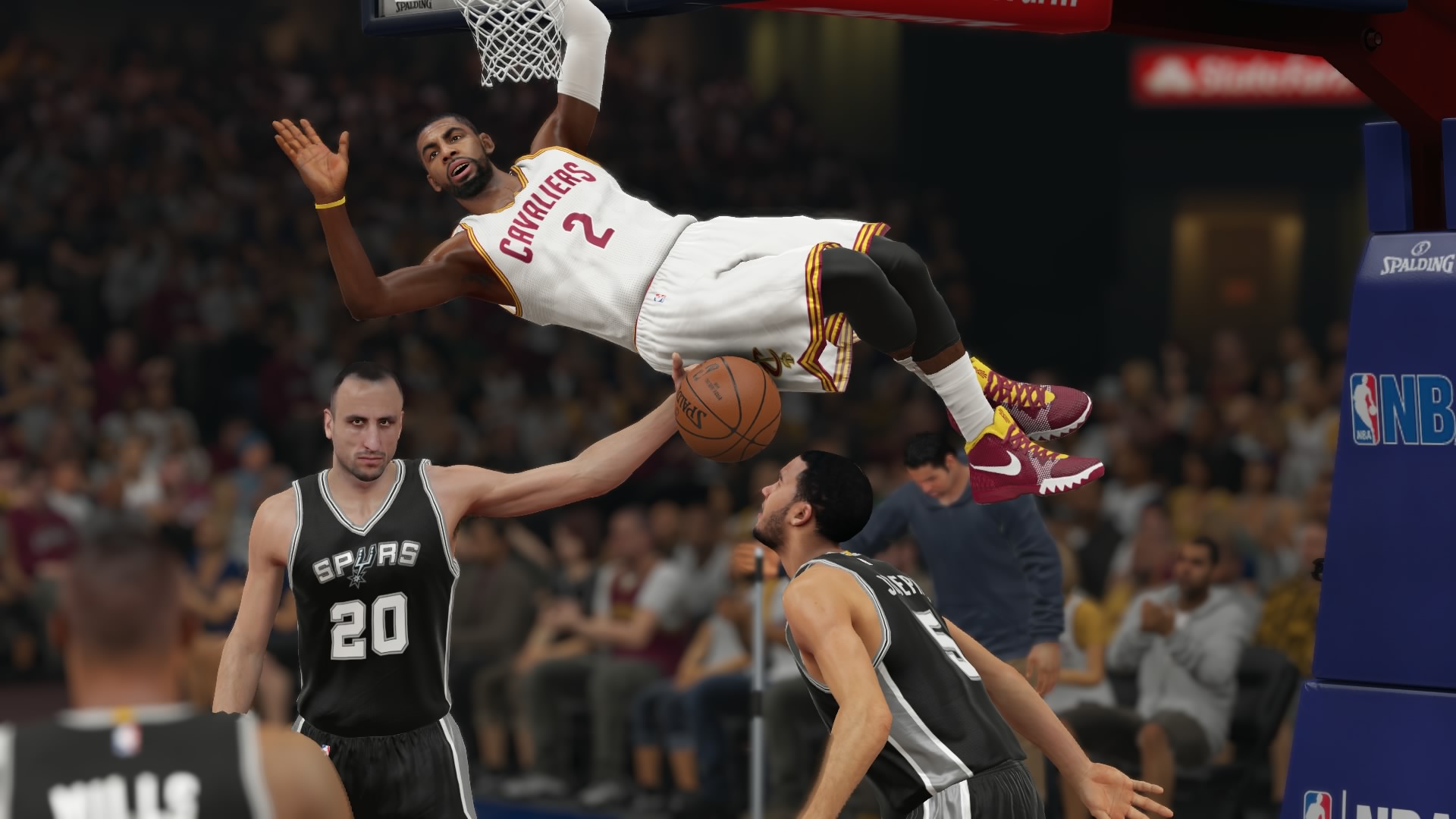 It’s extras like MyNBA2K15 that showcase how 2K’s NBA series has looked to blow away other sports games. As well as the app and soundtrack, there is also a dedicated web show, 2KTV, which can be accessed for free either in-game, through the app or your favourite web browser. The show aims to bring together a community of players, highlighting their creations, giving tips for MyTeam and interviewing NBA players, occasionally playing them one-on-one. 2KTV is fine and seems to be growing in popularity as more people purchase the game.

Another example of 2K15 going the extra mile is the return of Euroleague and classic teams to the roster from 2K14. Euroleague teams may not be of interest to most players, but it’s a welcome inclusion and good to see 2K recognising basketball is played in countries other than the US. Classic teams are always fun to revisit and put head-to-head to see which was truly the most dominate (hint: it’s the Celtics, always the Celtics).

Finally, 2K15 also offers facial scanning, which allows you to scan your face onto your player. It’s a cool concept but needs a little more practise or at least better coaching. More often than not, the rendering comes out nightmarishly wrong. My first attempt at scanning gave me Andre Agassi’s weird-shaped head while my second, with significantly better lighting, gave me a close-ish reproduction of my face, though I don’t think my eyes are really that sunken.

NBA 2K15 offers almost everything a hardcore basketball fan would want; and that may be it’s biggest downfall. I am a basketball fan and like other people, I enjoy sharing my passions and interests with others. I think that video games in particular can be a great way for people to get into a new sport but I wouldn’t recommend this to anyone thinking about getting into basketball. To be clear, 2K15 has worked so hard on perfecting the basketball experience, that it’s not so much a game as it is a simulator. As a consequence, this will have limited appeal to anyone without a thorough understanding of basketball.

This is evidenced in particular with the choice of Kevin Durant as the cover athlete. While he may be the 2013/14 season MVP and source of the “You the real MVP” meme, Durant is by no means a recognisable player for anyone outside the world of basketball. LeBron James is by far the NBA’s most recognisable player and his influence has already crossed-over to the mainstream. Perhaps he would have made the better cover athlete. 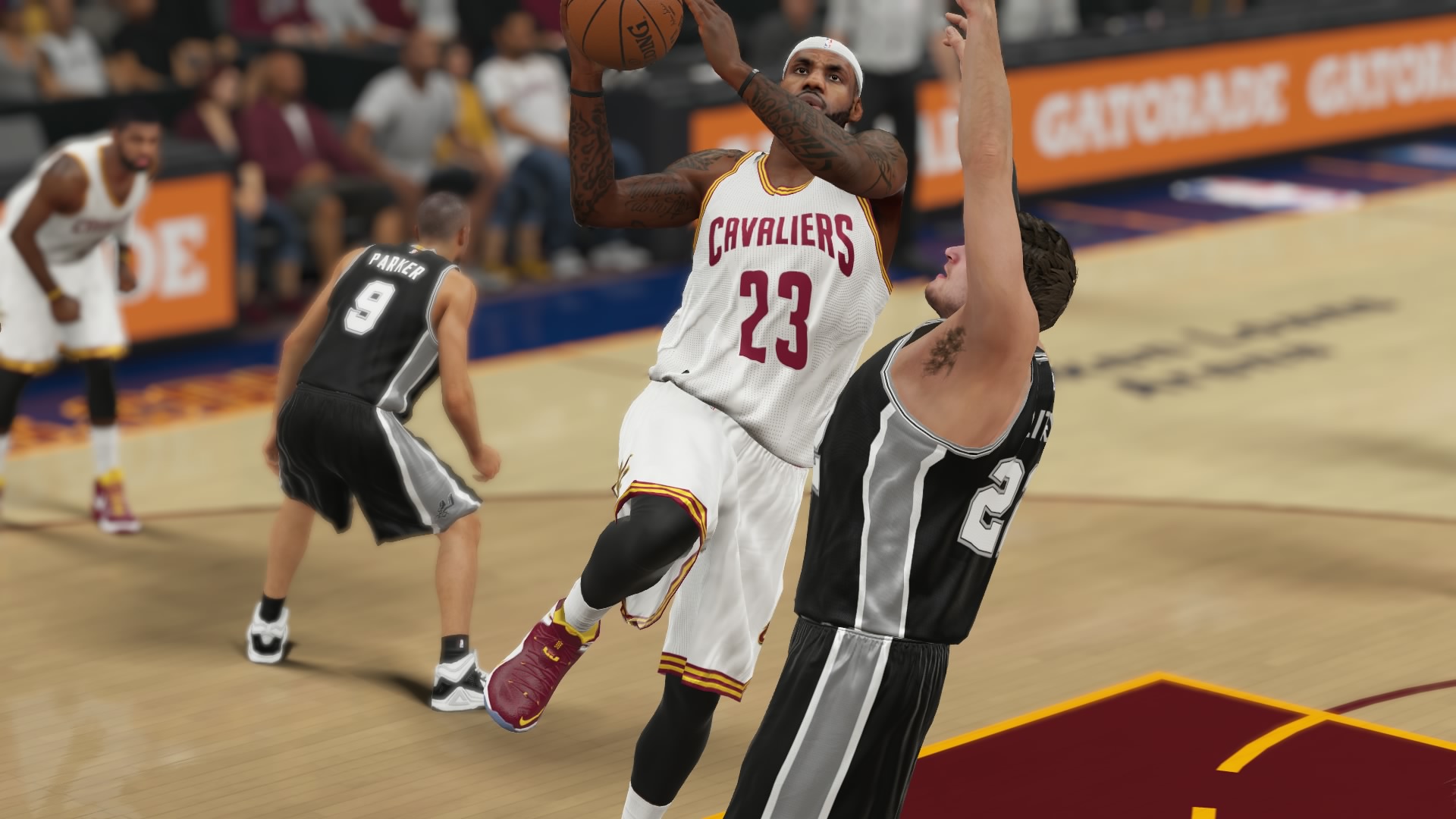 Maybe this criticism is being too picky and contradictory given my praise for the game providing a near perfect basketball experience, but I think above everything else, basketball (and games in general) should be fun. I still talk to friends about Midway’s NBA Jam and the amount of fun we had with it, especially with its now infamous “Big-Head” mode. I don’t want to wax lyrical about the good ol’ days, but games like NBA Jam helped create a new generation of basketball fans and make the sport cool again.

I love basketball and NBA 2K15 is the closest I’ll get to playing professionally. Maybe that’s the trade-off that needs to be made instead of having a fun game.