Having now played Ready at Dawn’s action title all the way through to its conclusion, I think I’ve figured it out. Yes, it is short. No, it isn’t great. But the sole reason The Order: 1886 will be remembered shouldn’t be because of the criticism levelled at it, but because Sony marketed it completely the wrong way as a reflection of our modern gaming habits.

The Order: 1886 takes us back to an alternate reality, where London is under the protection of an order of knights against the half breeds (or Lycans, which is also a fancier term for the good old werewolf). In this reality, the knights are aided by the miracles of Blackwater, a liquid that extends the life of anyone who drinks it and can heal almost all wounds, along with technology ahead of its time.

For the most part you’ll be following the story of Sir Galahad, along with a few fellow members of the Order and some strange and unusual critters of the seedy London underworld, though looks can be deceiving. I won’t spoil anything for you here if that’s the kind of thing you’re worried about, but the few twists and turns to the narrative aren’t all that surprising, though they help to establish the cast and the world they embody to decent effect.

When you’re not interacting with cut scenes (more on that in a moment), you’ll be playing a 3rd-person cover shooter, with what I have to say is the most impressive arsenal I’ve seen in such a shooter in a while. You’ll be firing off rounds of electricity with the Arc gun, wielding double barrelled pistols and all manner of other shotguns, pistols and machine guns. But the most impressive of the included arsenal are the Essex M2, an auto-rifle that features a stun gas mechanism perfect for taking on close range adversaries, and the Thermite gun that fire a highly flammable magnesium explosive that can be ignited at will.

When you’re in the heat of the action, all the items at your disposal will come in handy and it can get rather heated at certain moments, especially at particular story points. Unfortunately these moments are few and far between, and as much as I want to commend Ready at Dawn for creating a compelling action title, there are a few things that let it down.

Enemy A.I won’t trouble you, not in the slightest. You can’t exactly rest on a particular favourite weapon, but there’s always something lying around to take advantage of and since most of the soldiers, guards and rebel fighters you’ll come across are rather stupid, they won’t impede your progress all that much. Certain enemies are harder than others, such as the shotgun specialists, but once you figure out their weakness you’ll find it easy to exploit it.

When you finally come across the enemy you really want to fight, the deadly Lycans leave you a little perplexed as to why they’re there in the first place. They take more damage, sure, but really all they do is run up to you, swipe, then run away. Rinse and repeat that a few times until you’ve hit them enough to get in a swift knife to the heart at close range and you’re done. I really wanted more from those moments, if nothing else, something to really get my blood temperature a little higher. 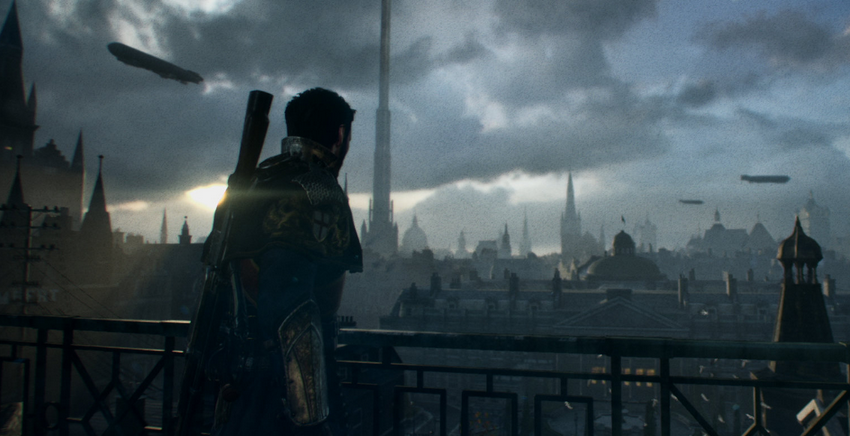 Let’s talk about those visuals briefly. Everyone talked up how much this game would use the PS4 to its advantage, and that’s fairly obvious to see. The details are rich and the environments well put together, coupled with some rather impressive facial animations not unlike the recent Infamous: Second Son (though with more facial hair). But there are moments that remind you that there’s still a ways to go in terms of creating something visually realistic, like characters gliding towards a door when they don’t match the preset animations just right, and turning on a dime as if on roller skates. The Lycans aren’t as detailed as they could have been either, but that’s a minor quip against a game that has some genuinely beautiful moments visually.

As I mentioned, there’s a lot of interactive cut scenes in this game. Whether you’re fighting a boss character (though I use that term loosely), interacting with fallen debris or pushing a door open, there’s a lot of timed button pressing here. There’s a few other moments here or there where interacting brings out other parts of the Dual Shock controller, though the touch pad is criminally underused. But the thing many reviewers seem to miss is the reason these scenes are all here, why so much of the game is just cut scene after cut scene. In short, it’s an interactive movie.

Sony tried too hard to advertise this as an explosive action title, a Gears of War for the PlayStation crowd, instead of letting its ideas live and breath openly. The Order: 1886 is more a sort of modern day point and click adventure with a shooting gallery mixed in every few levels than anything else. It’s not exactly easy to market something like that to a modern audience that constantly dines on open world action titles or first person shooters, which is, I expect, the reason so many people simply don’t like it.

For me however, despite it’s shortcomings and a few moments that could have been fleshed out, The Order: 1886 actually a really competent adventure that I enjoyed. There’s a fascinating world that Ready at Dawn have moulded together here, with some intriguing ideas about the Industrial Revolution and the evolution of the species, and I really hope they get a chance to explore it further and learn from this first up experience. Unless Sony decide to pull the plug early, which would be a real shame.

Yes, there are bugs. Yes, there are character inconsistencies, little replayability and a rather obvious ‘wait for the sequel’ ending. However, if you go into this with your mind open, expecting an interesting premise rather than all out action then you’ll be well catered for. If, perhaps, this had been pitched as a budget downloadable title on the PlayStation network instead of a AAA full blown release, things might have been different.