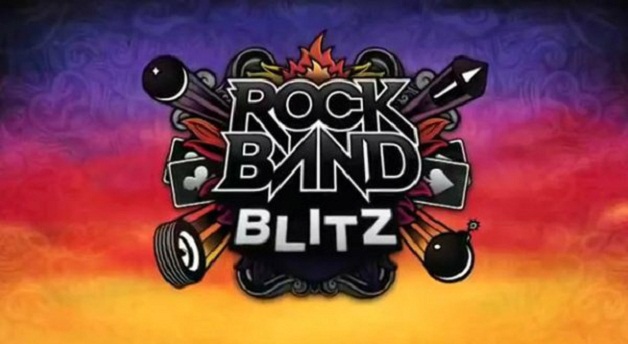 The plastic instrument revolution has come and gone. The days and nights of strumming, drumming and singing off-key are no more. While Guitar Hero faded away in sequel after sequel, Rock Band took this opportunity to evolve. Rock Band Blitz manages to radically change the way we play, but still have the player feel like they are playing the music.

Unlike previous Rock Band games that had you choose an instrument to play through the song, Blitz puts you in control of up to 5 instrumental tracks at a time.   To make up for worrying about more tracks, instead you’ll only play two notes, a left and a right. The songs in Rock Band Blitz are divided into sections. The key to earning high scores is to play enough notes in each section to raise your multiplier to its maximum. Once you enter a new section, the maximum multiplier rises according to how well you did.

This is not as easy as it sounds, since some tracks may not be well represented in a section. Vocals need your attention since they don’t show up as frequently as drums or guitar. So you will be frantically switching back and forth trying to accurately play the notes cascading towards you. In addition, you can choose a load out of unlockable power ups. Some give you more points for a specific instrument, some allow you to gamble your points on whether or not you can play flawlessly, and some just randomly eliminate notes across all tracks. You have to choose what power ups fit your style and the song. 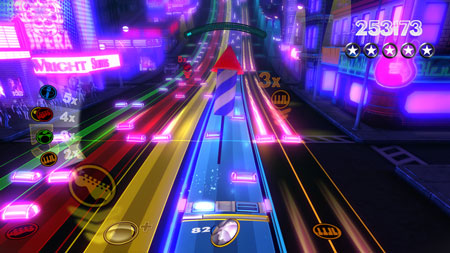 Rock Band Blitz comes with 24 songs representing a little for everyone and each of them can be played in Rock Band 3. Unfortunately, it only goes one way as the Rock Band 3 songs cannot be exported to Blitz. With the bare bones Rock Band Blitz package only offering you a small variety of songs, some achievements are impossible to get without a sizable library. Luckily, these achievements only represent a small portion of overall achievements, but it does feel a little like exploitative to have a “Play 300 unique songs” achievement leaving you to buy the remaining 276 songs. 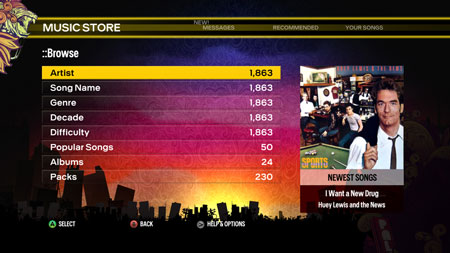 For only two dollars, you can feed Huey Lewis. (For an extra fifty cents you can also feed The News.)

To get the most out of Rock Band Blitz, I recommend connecting to Rock Band World in Facebook. Harmonix has set up numerous challenges designed to get you to play some of those songs you may have neglected in order to win extra coins. Coins are vital in Rock Band Blitz because they pay for the power ups you’ll play in each song. You get 100 coins per star, and double coins for playing a song for the first time. In addition, you get extra coins for completing Rock Band World challenges, so in time you will have banked enough coins that you will no longer have to worry about them.

All in all a great deal since the game is fun and infinitely replayable, but unless you have a large library of DLC its novelty wears off as quick as you get tired of the 24 base songs.   I would love to see an ability to create a playlist or just dispense a series of random songs, or a series of in-game challenges and progression bars like Rock Band 3 has. In the meantime I give Rock Band Blitz a solid 8. 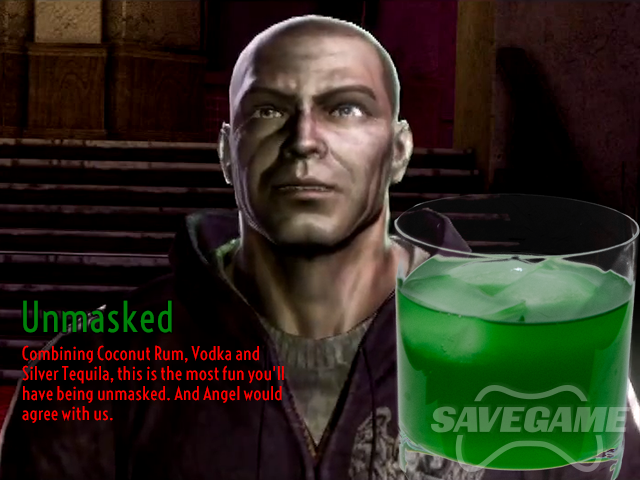