Everyone remembers their first time. It’s just one of those memories that never goes away. I remember mine. Ah, those were the days. I was younger, thinner, and much more innocent. Also, I was twelve.

Of course, I had systems before. My parents had gotten me and my sister an old Atari, and a pretty fair amount of games. We had the standard selection of normal, standard games whose names have been lost in the ether of the passing years.

We played a good amount, but it was really more of just something we could do that we wouldn’t be fighting about, something to pass the time. At the time, we weren’t gamers, just people who had a game system.

Even years later, when my parents got us a used NES, we still weren’t gamers. Yeah, we have better games and a better selection, and we played a lot more, but it was still just a pastime.

But when I got IT… I was a gamer. I remember the day like it was yesterday: I had saved up my hard-earned money from my allowance and doing odd jobs for family. I had $75, which to me, was a huge amount of money. I had decided what I wanted. We went to the store, and I got the first game system I ever bought myself: a Sega Genesis. I even had enough for my first game as well: Sonic 2. Oh, the magic of unwrapping the system, hooking it up to the tv, and… nothing. They had given me the wrong power adapter, so I couldn’t play yet. I had to go back the next day to get the right adapter, and then… the magic happened. 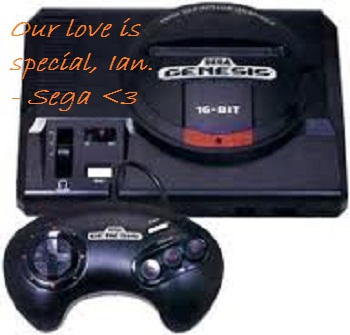 I played Sonic 2 over and over and over again. I didn’t beat it at all those first few weeks (come to think of it, I don’t think I’ve ever beaten it) but it didn’t matter. I was hooked.

Soon, my parents found the benefits of my newfound passion: bribery. If I failed a test, they could threaten to take it away if I didn’t pass my next one. And it also made Christmas and birthdays easier. Now, instead of trying to figure out what to get me, they could pick up ANY game and I’d almost certainly be happy. Revolutionary games like Sonic and Knuckles and Vectorman stood right alongside Comix Zone and Shaq Fu. The quality didn’t matter, as long as I could play it, I loved it.

Eventually, though, it started to fall by the wayside. I started playing guitar, and video games soon started to feel childish and lame. I still played from time to time, but… I started to not really consider a gamer anymore. I was losing my way and, for quite some time, was a lost sheep. Sure, I played some Playstation here and there, but while I enjoyed them, it wasn’t really an obsession.

Then N64 came out. Oh, the happy times that was! Again, I saved up my money (this time, $150… holy crap these things are getting expensive!) and bought the system. But this time, I bought it NEW! Along with Star Fox 64 and the wonderful gold controller, I was flying high. And once again, I considered myself a gamer.

The glut of games that I had! Hexen 64, Doom 64, Bomberman 64, Mario 64, etc (64). My gift-receiving days were now full of memory cards, rumble packs, extra controllers, and more and more games. Soon, my obsession knew now bounds. I’d stay up late playing games, then wake up, go to my friend’s house, and play more. We talked games, read Nintendo power, and searched the web for cheat codes.

Like dating, this period was full of awkward moments, a lot of thinking that I knew what I was doing, but mostly, a lot of fumbling around looking for The One. The game that would speak to me, the one that, after finding, I could proudly call myself a gamer once more. 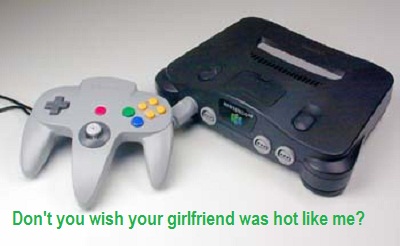 Then Halo came about. From the first time I picked up the controller, I knew this was The One. The graphics, the sounds, the gameplay… it was beautiful (it also didn’t hurt that I somehow had a natural ability to PWN my friends).

Of course, the problem at this time was lack of funds. So, I have a confession: I never actually bought a game system after my N64 (hides from expected nerdrage).

Oh, I have an Xbox. When Halo 2 came out, my loving family came to my rescue. They knew I couldn’t afford my own system (college and horribly paying part-time jobs are not a good mix). But on Christmas day, after the whole “yay, family” thing was over, I sat down and logged four hours into the game before finally passing out from a combination of exhaustion and cold medicine. But I knew it: I was, once and for all, a gamer.

As for the other systems… well, my wife has almost always had a better paying job than me, and I can thank her (thank you!) for picking up the 360 and the PS3. And her Mom for the Wii for Christmas a while back.

But with all of the game systems, and all the wonderful new games that come with them, I will always remember my first time, and the mess it created.