Know it All Kickstarter 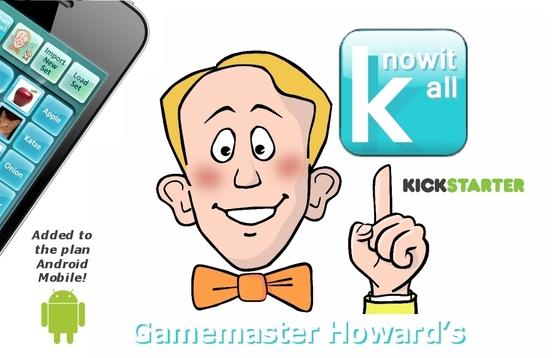 Howard Phillips comes across in his Kickstarter video and his Twitter account as someone who is very aware of his place in video game history. As Nintendo’s “The Man Who Plays Video Games For A Living”, Phillips had the job that any kid my age in the late 80’s wanted to have. Although he was the public face of Nintendo of America, most remember the cartoon version of himself from the Howard and Nester comics, a single sheet comic found in Nintendo Power where Howard would teach Nester important tricks like how to exploit the 1-up loop in Ninja Gaiden.  So to me, he was a man who needed no introduction.

Phillips has launched a Kickstarter for a new game that he hopes can be used to learn anything you want. Know-It-All is based on the principal of repetitive learning. An example of repetitive learning is how even after years of not playing The Legend of Zelda, you not only can find your way through the overworld, but know where the secrets can be found. Still not convinced? Repetitive learning is also responsible for learning how to type. We don’t think about where the keys are, we just move our hands because it has become second nature. Know-It-All takes these principles and uses audio cues to make associations with tiles containing words or images, when you hear the audio cue, you try to find the like tiles and slide them together. While you’re scoring points the game appears to speed up forcing you to make the associations quicker.

In the Kickstarter video and subsequent updates, Phillips has provided examples for what Know-It-All could be used for and has lobbied his backers for suggestions. I could see Know-It-All being used for foreign travelers to learn basic skills by hearing the English meaning and seeing foreign words or signs.   A similar approach is used by Rosetta Stone (which is why even after taking a few lessons of German about 4 years ago I still remember that pferd means horse, which is not immediately helpful, but who knows when I’ll use it).  Another use could be teaching autistic children how to read facial expressions in others, something that can be done on their own time and doesn’t require anyone else. Personally, I’d like to use it to memorize the chemical receptors in the brain for my neuropsychology class. All of these things sound at least hypothetically possible using Know-It-All.

There are only a few hours left in the Kickstarter, which seems to have a lot of promise to teach in a way that reaches people who don’t want to learn with books and memorizing fact after fact. I became a backer almost day one, not only because of the concept, but because Howard Phillips thinks it’s a good idea.   Over his close to thirty years of experience working with Nintendo, LucasArts, THQ and Microsoft, Phillips has tried to keep games fun and interesting. Now, he’s trying to create something educational using those same foundations, which could impact a new generation of people. That kind of lofty hope is something I can get behind.