We here at Save Game believe that Sundays are for curling up on the couch and spending quality time with your loved ones.  And by loved ones, we mean video games.  But Sundays can also be about giving back and getting involved, so to that end, Sundays at Save Game are becoming Kickdays.  What’s a Kickday, you ask?  Well, read on and find out.

By the lovely (and hopefully not too copyright infringey) graphic at the top of the page, you’re probably deduced that Sunday Kickdays have something to do with Kickstarter, and you’d be right.  The crowdfunding website has become a major force in the indie game development scene, and along with Steam Greenlight, is one of the most powerful tools indie developers can use to bring their games to market.  We’ve all heard about the huge success stories, like Double Fine’s Broken Age, and Obsidian’s Project Eternity.  But for every big win on Kickstarter, there are many more games that slip through the cracks.  So what we’re trying to do with Kickday is simple: find cool games that need a little love, and shine the mighty Save Game spotlight on them.  Wanna see the mighty Save Game Spotlight?

OK, so it’s not the mightiest spotlight ever, but at least we’re trying!  Anyway, for the very first Save Game Sunday Kickday, we’re shedding a little bit of light on a game called The Breakout.  And no, it’s not the game with the paddle and ball and lots and lots of bricks. 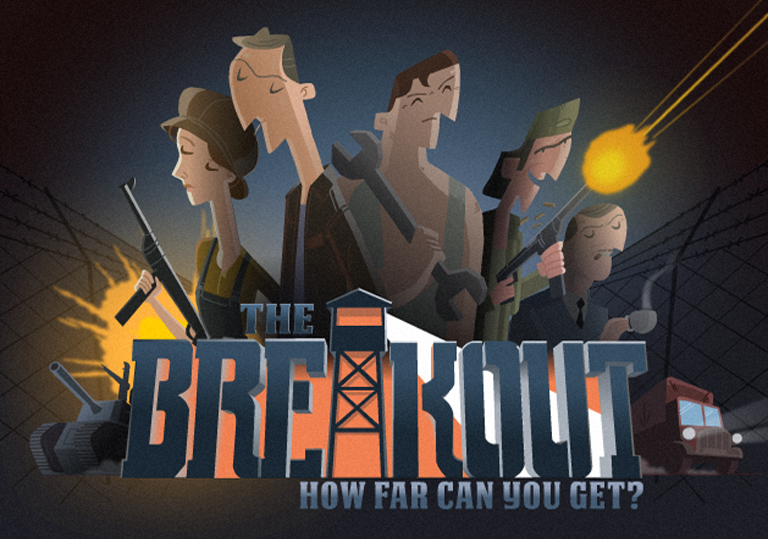 The Breakout is a point and click adventure game in which you take on the role of Lt. Guy Kassel, an allied pilot in World War 2 who is shot down over Nazi Germany and taken prisoner.  Once inside the prison camp, Kassel must team up with other prisoners to plan and execute a daring and seemingly impossible escape.  During the day, you’ll have to seek out other prisoners, form alliances, and the build trust amongst your fellow would-be escapees.  Once the sun sets, you’ll be able to prowl the camp, searching for supplies, gathering intel, and staying away from the ever present guard patrols. 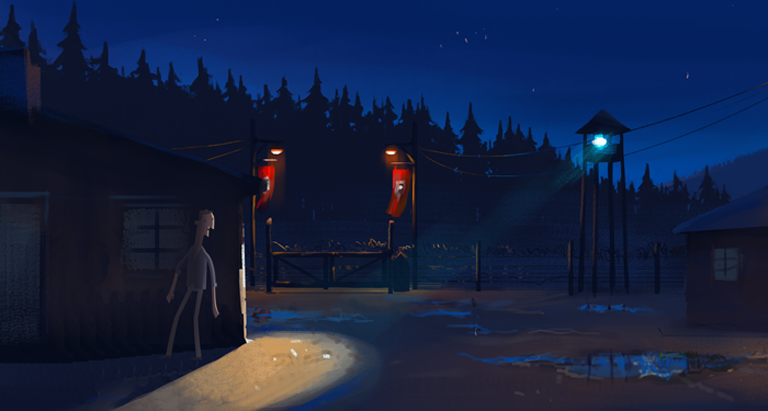 Sound interesting?  Would it sound more interesting if I mentioned that as Kassel and company plan their escape, they also uncover evidence that the Nazis running the prison camp are involved in an occult secret society, and are intent on using their prisoners in a mass sacrificial ritual?  Yeah, definitely more interesting now.  Want to see the game in action?  Here’s an early look at the game’s introduction.

The Breakout is being developed by Pixel Trip Studios, which was founded last October by Adam Jeffcoat, who spent a decade in the animation industry before making the jump to video games.  He is joined by Vincent Kamp, James Allsopp and Alexander Hedberg, who all bring a wealth of programming and animation knowledge and experience to the project.  Based out of London, The Breakout is Pixel Trip’s first production, and they need some help to see it through to completion.

With a week left in the Kickstarter campaign, The Breakout is currently at £13298 of their £49500 goal. There are 7 days left in the fundraising period, so if The Breakout seems like something you might be interested in playing, now would be the time to join the campaign.  Check out the different pledge levels below.  All levels are cumulative, meaning that once you decide on a pledge tier, you will not only receive the reward for that level, but all levels below it as well.

While the merits of spending many hundreds of dollars to see yourself in the game are debatable, paying under $20 for a beautiful adventure game inspired by the point and click classics on the past, as well as war movies like The Great Escape, should be an easy decision.  So why don’t you make this Sunday a Kickday, and get onboard with The Breakout?