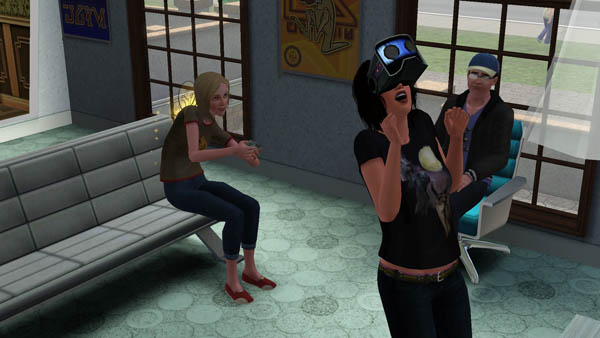 This is, essentially, exactly how I saw this going down.

With  a new world, Dragon Valley being released on May 30th and that whole The Sims 4 thing on the horizon in 2014, I thought it would be beneficial to go back to my Sims 3 game and see just how much havoc I could wreak using some familiar faces and a whole lot of expansion packs.

Thus, I have created a few Save Game sims with which to gleefully traipse around the land, speaking Simlish, getting into trouble and generally entertaining the ever loving crap out of me for hours on end.  Naturally, as I thought about the possibility of making this an ongoing feature for Save Game, it seemed only appropriate to make a few Save Game themed Sims – namely versions of myself, Tash, and Joe.  We have a lot of awesome people who make Save Game what it is, but the sad truth about me and The Sims is that I can really only multitask so much, so three sims in one house seemed like a pretty good number (for now).

The first thing you have to realize is that there are a lot of expansion packs going on once you install them.  And they all go on simultaneously.  Rather than list all of the packs I installed for this little project, I thought it better that my cat, Burt Reynolds model them for you (not seen is the Ambitions pack). 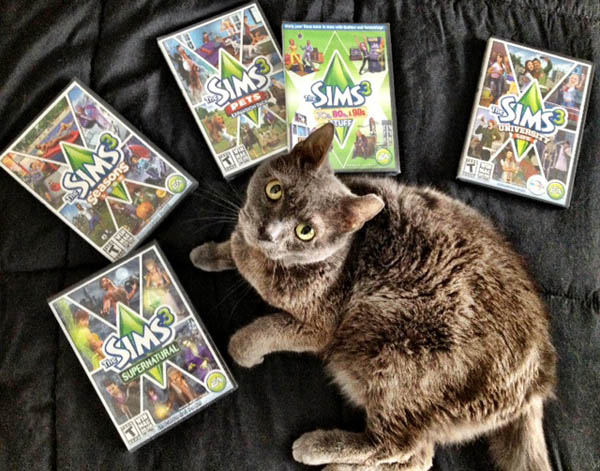 Sexy right?  Anyway, as I was mentioning, each pack, when installed mingles with the next pack, so you can, for example have a vampire from the Supernatural pack go to college in the University Life pack while wearing a jacket because it’s cold because you have Seasons installed.  There are a lot more packs than the ones I installed, but I’m still not sure how I’m going to keep them straight (and who needs that Katy Perry stuff anyway).

The first thing I did, obviously is get the Save Game kids set up on their home office so they’d have a place to work and play.  Naturally, Tash got right to work, while Joe and Jen did nothing but play video games. Jen is a terrible influencer I fear and she seemed insistent that they go hang out in their retro gaming room. 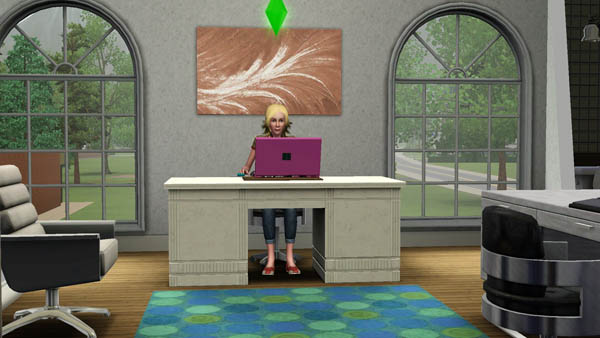 Writing that next review, obviously. 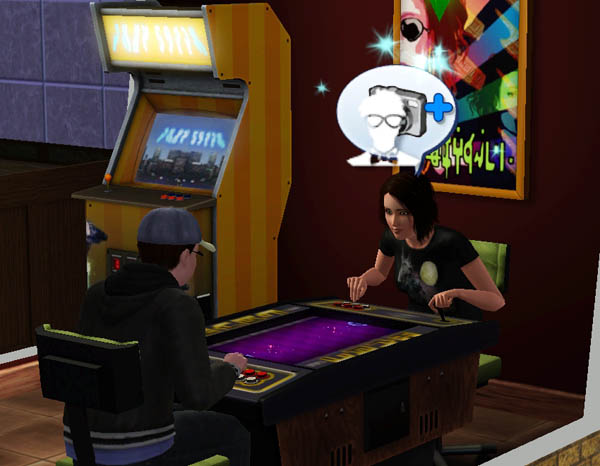 Total slackers (and why is Jen fantasizing about Colonel Sanders?)

One of the packs I was really excited for was the Supernatural pack!  With that pack the player can create a werewolf, a fairy, a witch, a ghost, or even vampires to play.   I thought it fitting that Tash is a teensy little fairy and it seemed clear to me that Joe’s inner werewolf needed to be let out.  I made the Jen sim a witch because why not and that sounds about right. 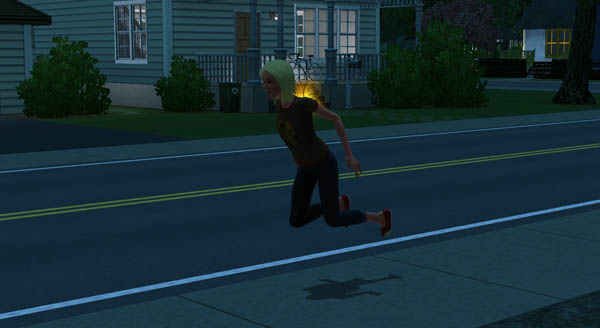 Fairy Tash is too good for your god damned sidewalk. 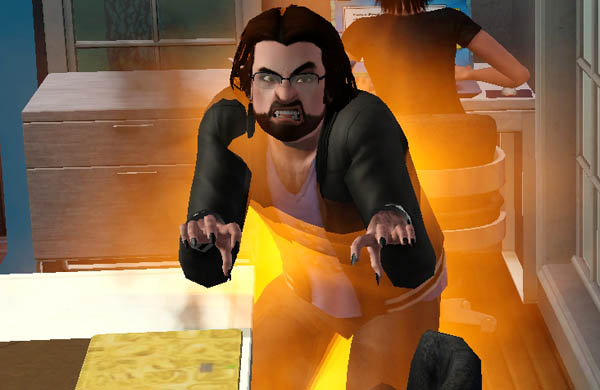 Joe is unleashing the beast. 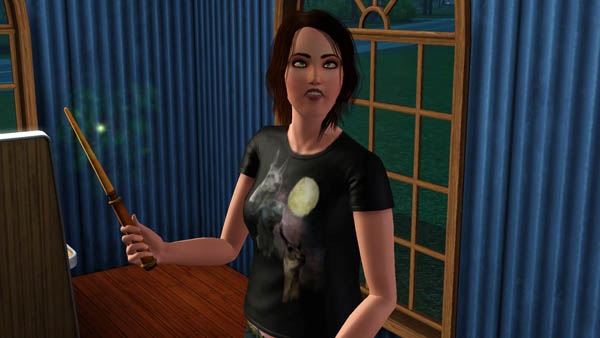 Normally the first thing you’d want to do is get your sims a job since those awesome 3 Llama Moon tshirts aren’t going to buy themselves.  But I thought why give these guys a job when I can just send them to college?  It’s been over a decade since I’ve been in college (oh Jesus Christ) so I was looking forward to letting my friends here go off and make a shit ton of booze filled poor life decisions in an environment that rewards bad judgement calls.  Hooray college!  At first I was unsure how to enroll them in classes but then this llama faced muh-fuh strutted up onto the freakin’ porch and was all “Hey. College.” And the sims were all “okay” and packed their suitcases.   That’s a loose translation of the Simlish that took place anyway. 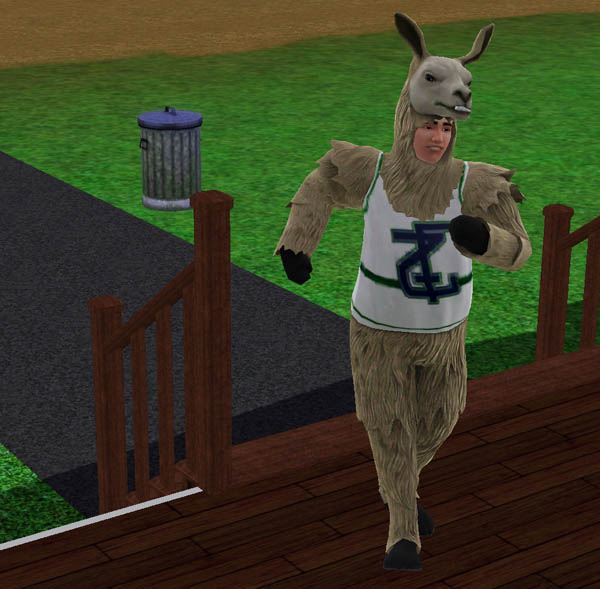 Get off my lawn, you freak.

Joe’s already looking to hook up. Must be those werewolf urges.

I’m looking forward to capturing some adventures and creating some more familiar Save Game friends while I try to discover everything each one of these expansion packs has to offer.   There is so much content here I barely know what to do with myself so I only hope I can document it in a way that’s also entertaining to all of you!

Also did I mention there are cats?! 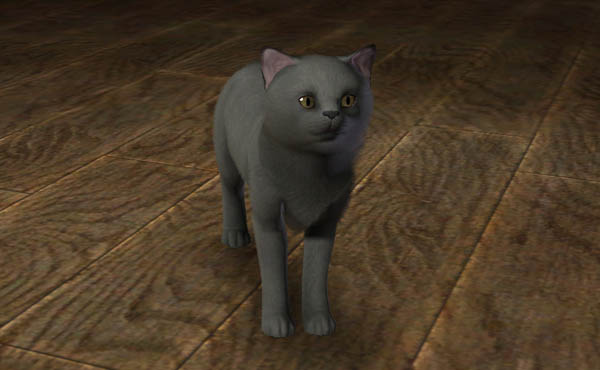 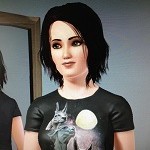 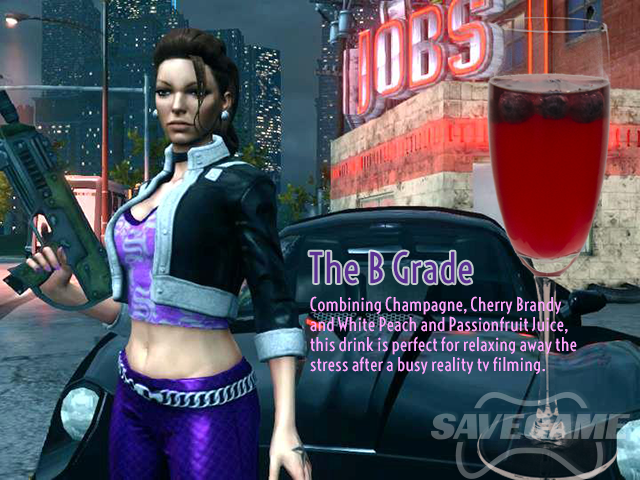