Castlevania: Lords of Shadow 2 hands on 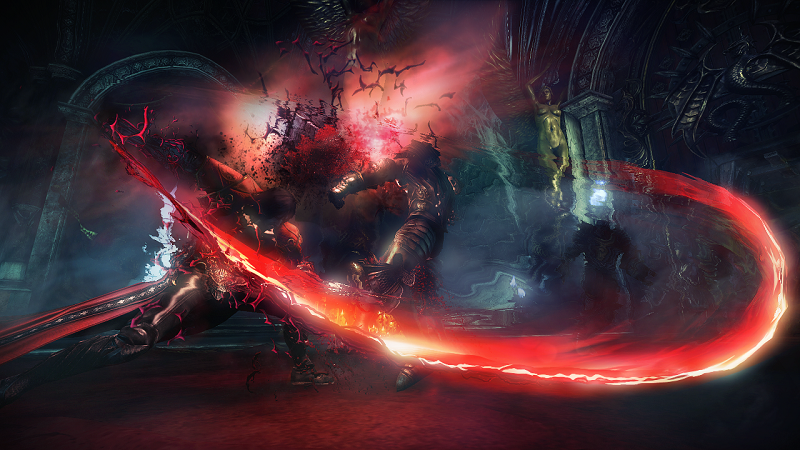 Preview events are usually a pretty standard fare – you go into an office building or a booked out room, where consoles have been set up and you play through sections of a game. Nothing out of the ordinary. The preview event I attended last week took place in a Red Cross blood donor centre. Yeah, it was a little odd, but it makes more sense when you take into consideration it was a preview event for the upcoming Castlevania game, Lords of Shadow 2, in which you play the infamous vampire Dracula. Attendees not only got to step into the shoes of the legendary vampire, but also learn about the importance of donating blood.

Castlevania: Lords of Shadow 2 continues the rebooted plot of the Castlevania series begun in the first Lords of Shadow game and continued in Lords of Shadow, Mirror of Fate. Don’t worry if you haven’t played these games, as Lords of Shadow 2 brings you up to speed on their plots, albeit through a long cutscene. You play as Gabriel Belmont, a man who used to be a warrior who guarded innocent people from evil, supernatural creatures. Sadly for Gabriel, he was cursed and transformed into the vampire known as Dracula and now, as Dracula, you have a variety of abilities at your disposal- the most notable of the bunch being immortality. Dracula will live forever, and whilst some may see immortality as a gift, Gabriel sees it as a curse, and as a result the poor guy is spending his time in a deep depression. Given this, and having awoken in the present day, he seeks a way to end his immortality.

“Wait,” you wonder, “why don’t you just jump off a cliff or let him die?” Unfortunately for Dracula, it isn’t that simple. According to the game lore, Dracula can only be truly slain using a particular artefact that belongs to the ancient Brotherhood of Light. The leader of this Brotherhood isn’t happy with giving Dracula something for nothing, and so a deal is struck where Zobek, the leader of the Brotherhood of Light, promises to allow Dracula to die if he assists the Brotherhood in preventing the return of Satan. As in The Devil. Given this premise, the game certainly doesn’t hold back, and is often quite dark and violent. This is a game starring Dracula after all – you’ll often find yourself sucking the blood of victims in order to heal.

Regeneration also plays into gameplay through the course of the game, where if Dracula falls off a ledge during a platforming segment, he’ll respawn at an earlier point with a bit less health. Another such scenario is when using Dracula’s ability to possess rats – Dracula can continue respawning should the rat die, so long as there’s another rat in the pack he can possess. Other abilites, however, aren’t so grounded in logic, such as the use of the health bar in game – if it empties, you see a game over and have to restart from the last checkpoint- but why? Dracula can’t die – and it stands to reason he should just be able to keep going. Whilst this wasn’t a huge detriment to my enjoyment of my time with the game, it does mean a key game mechanic doesn’t make as much sense as it should.

Despite this detail, the plot of the game itself was gripping, and the mystery surrounding the game’s events made me want to keep playing to find out where it was headed. Complementing this, the voice acting (featuring talents such as Patrick Stewart and Robert Carlyle) assists in setting up a haunting world that combines gothic fantasy and more modern elements, with a similar aesthetic to the Underworld films. Dracula’s hallucinations will have you jumping between the sci-fi setting of the present and gothic castles of the past, and as these worlds begin to meld together you start to wonder how much of the game’s action is actually happening, and how much is just imagined. 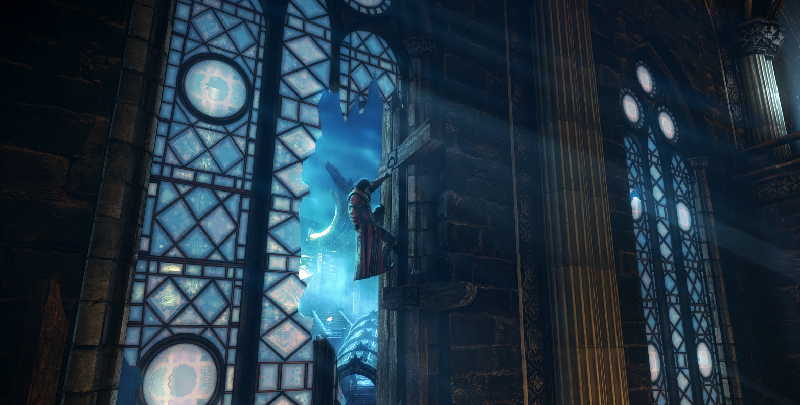 The game is split into platforming and puzzle sections, as well as combat sections which have more in common with action games like God of War and Darksiders than the previous 2D instalments in the Castlevania series. The platforming is rather light platforming – similar to what you would see in games like Uncharted and the early entries in the Assassin’s Creed series – with an occasional quick-time event thrown in (but don’t worry, quick-time event detestors – all the ones I saw were that easy that you would have had to try to fail in order to not pass them).

In combat, you have three main ‘movesets’ at your disposal, with each having their own traits and abilities. The first is the standard Whip which allows you to hit enemies from further away, and gives you access to Dracula’s vampirical powers such as summoning swarms of bats. The next is the Void Sword, which drains enemies’ health as you damage them. You can also use Void Magic to freeze water and enemies. The final moveset is the Chaos Claws, which limits your range but allows you to deal heavy damage and break enemies’ defenses. Unfortunately I didn’t get to see what extra abilities it grants you during my hands on. What was evident was that the Sword and Claws, due to their special abilities, deplete a charge when used. This can be regenerated by dealing damage without getting hit, putting more importance on avoiding enemy attacks.

The combat itself has a nice flow to it. Once you’ve worked out each enemy’s attack patterns and how to dodge their special unblockable attacks, you’ll get a lot of momentum going as you bounce from landing long combos, to countering basic attacks, to dodging. You have to mix up all your abilities to ensure you’re dealing as much damage as possible, while avoiding taking it yourself. You’ll unlock new abilities as you progress through the story, and you can also purchase additional abilities with experience points gained from defeating enemies and solving puzzles. Whilst at the very beginning your options are limited, you’ll soon be able to unlock different weapons and purchase upgrades for them, substantially increasing your arsenal. Before too long I was using long range crowd control attacks with my whip, healing any damage I took with the Void Sword, and leaping over tall enemies to hit their weak spots.

Battles have a big focus on pattern recognition, but the game’s bosses often challenge the player by requiring you to work out a puzzle or gimmick as well. As an example, you may have to use your Void Magic to slow down a speedy boss, or you may need to work out you can only deal damage to a boss by hitting a weak point that travels across their body. The combat isn’t anything genre-pushing, but it works, and it had me entertained. 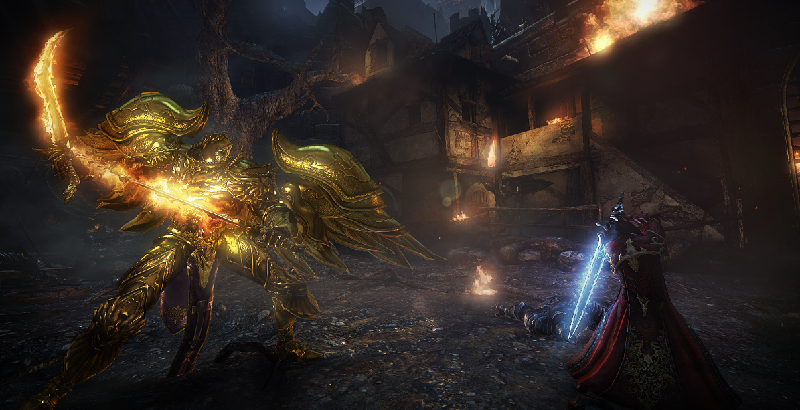 You can also use your unlocked abilities outside of battle to solve puzzles. In order to progress through the games’ levels, you’ll need to think about how your skillset can be used to manipulate the environment and the creatures within it. Take, for instance, your Void Magic- outside of battle you can use it to freeze waterfalls in order to create ledges for you to climb up. Dracula’s ability to summon swarms of bats can also be used creatively- the swarms can be used to distract enemies that are too powerful for you to fight so you can sneak past them. In order to gather all the upgrades and lore hidden in levels, you’ll need to return to levels you’ve already completed once you’ve unlocked the abilities required to get to them.

From the few hours I played Castlevania: Lords of Shadow 2, it didn’t appear to do much I hadn’t seen before, but that doesn’t mean it wasn’t a well-made or an enjoyable game. The core gameplay was engaging and often made me think as opposed to just mashing buttons, and this gameplay was attached to a story that I was really enjoying and wanted to see through to the end. Castlevania: Lords of Shadow 2 also featured some really beautiful environments, and the combination of gothic and modern elements was interesting and made me want to explore its world more.

Castlevania Lords of Shadow 2 launches on February 27th 2014 on PS3, Xbox 360 and PC. Returning to the unique nature of this hands on event, it would be remiss of me to not mention that Australia requires a massive number of 27,000 blood donations a week. One in three people will need a blood transfusion in their lifetime, but currently only one in 30 people donate blood. So with that in mind, consider donating blood to the Red Cross if you’re eligible, because you’ll help save a lot of lives. The needles aren’t that scary! You can check out the Red Cross blood donation website for more info.