The Ultimate Ninja games on PS2 were one of those series that my friends and I would whip out at gatherings every now and then. They were easy to pick up and play, and seeing our favourite characters beat the crud out of each other with their special moves was always exciting. I haven’t watched the anime in a while, nor have I played any of the Ultimate Ninja Storm games, but when given the chance to try out the upcoming instalment, Naruto Shippuden: Ultimate Ninja Storm Revolution, I wouldn’t say no!

Revolution is a 3D arena fighter for up to 4 players, which is a big change from the 2D fighter games I’d played in the series, but mostly stays true to the core of them. It features story content based around the Shippuden arcs of the anime, as well as some original scenarios made for the game. The game has a huge amount of content, and through my hands-on session I was able to try some of it out.

The fighting is much simpler than most other fighting games. Combos mostly consist of pressing the same button repeatedly, but adding directional inputs in certain parts of the combo will allow you to branch into more powerful ones. Each character also has a projectile attack, and can be assigned ‘ninja tools’, which are items that can be used in battle with varying effects. Characters still manage to feel unique, however, due to different gimmicks in their movesets. For example, Sasori fights with a puppet that can be moved independently from him. Sasori can’t use any attacks, so he has to move his puppet near the opponent in order to attack with it. The puppet is immune to damage, but Sasori himself is not, meaning you have to keep the pressure on the opponent with your puppet, but also be careful that they don’t get too close to you. Then there’s Shino who, instead of making combos with his physical attacks like other characters, combos with his insect projectiles. There’s a heap of weird movesets and characters from all throughout the anime, featuring characters from earlier seasons as well as the more recent Shippuden characters.

There’s a few other mechanics to utilise as well. If the battle rules have been set to allow it, you can select characters to act as your support, who will assist you with a special move when called- Might Guy will fly in with his Dynamic Entry, for instance. Another mechanic is the ‘Substitution Jutsu’- If you time a button press correctly, you can use Substitution Jutsu to avoid an enemy’s attack and teleport into a more advantageous position. This is tied to a gauge now, so you can’t spam it endlessly like in the older games. You’ve also got a chakra bar, which charges when you deal and take damage, and you can also try to manually charge it when standing still. Chakra can be used to power up your projectile, and activate a character’s special moves. This gauge could have another use, depending on which Battle Style you picked at the character selection screen.

If you have the Ultimate Jutsu Style activated, you can activate a powerful special move that will deal a large amount of damage. If support characters are enabled then you might even be able to call in your assisting characters for an Ultimate Team Jutsu. The other two Battle Styles (Awakening and Drive) rely on a separate Storm gauge, but I didn’t get to test them as extensively as the Ultimate Jutsu Style. Awakening will allow your character to activate a more powerful form when the Storm gauge is full, while Drive will allow you to boost your own stats or seal your opponent’s chakra.

The game has a number of story modes available, which feature stories relating to the plot of the anime, as well as some purely original ones. One chapter I played showed how the Akatsuki group was formed. The story was told via anime cutscenes, broken up by fights. The cutscenes feel as if they were taken right out of the anime, but were actually made just for the game. The gameplay to cutscene ratio definitely wasn’t in gameplay’s favour, but chances are you wouldn’t be playing this game unless the plot of Naruto interested you. 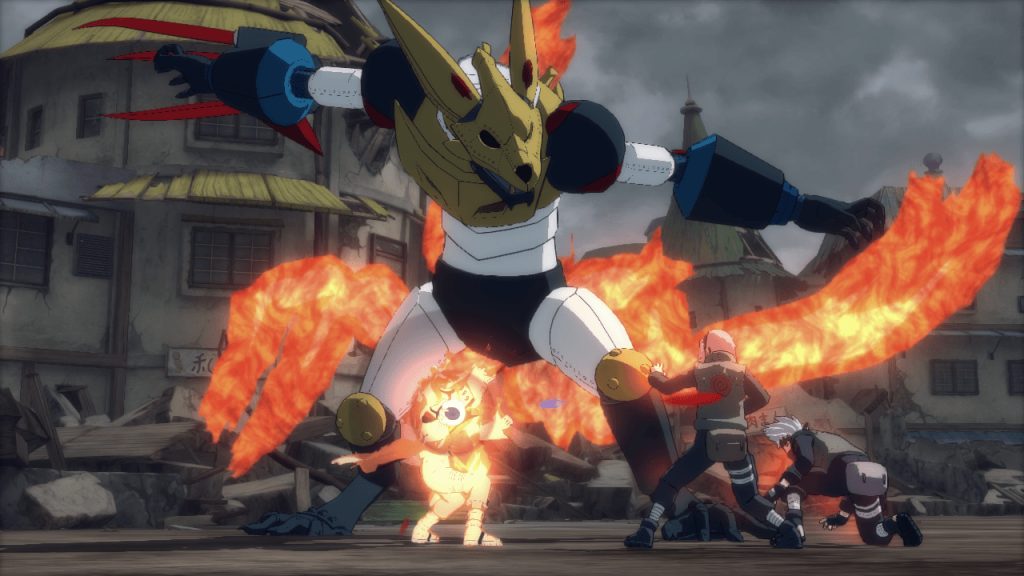 There’s also a Ninja Tournament mode, which gives you the option of playing two different stories that accompany tournaments between all sorts of characters from the Naruto universe. These are absolutely non-canon, as they feature characters from all different time periods, some of whom aren’t even alive anymore. I didn’t try out the main tournament story, because when I saw the name of the secondary one I couldn’t go past it. This tournament tells the story of an original character designed by Masashi Kishimoto for the game- Mecha Naruto. Yes, a robotic Naruto, fit with rockets, robotic voice, Rasengan ability and even his own Kyuubi transformations- it’s as weird as it sounds. Naruto and Hinata find him beaten up on the side of the road, and the three team up to win a tournament and get Mecha Naruto’s memories back. I played up to the end of the first battle in this mode.

In the tournament modes you can wander around the Hidden Leaf Village and its surroundings, allowing you to talk to characters, find hidden items, and spend the currency you earn from playing the game in stores to unlock items, art and more. The fights in the tournament feature four combatants, and the aim isn’t to knock out your opponents, but rather to have the most orbs at the end of the time limit. Characters drop some of their orbs when they get hit. Each fight consists of three rounds, one for each team member. You’ll see which order the opposing teams are placing their team members, so you can rearrange the members of your team into the order you desire. The 4 player orb collecting is certainly a change of pace from the usual battles, but I’d honestly just prefer normal battles, even if the 4 player free for all format stayed.

It’s unlikely that you’ll find the depth that the likes of Street Fighter or Tekken have in Naruto Shippuden: Ultimate Ninja Storm Revolution, but it’s sure to be a bit of fun regardless, thanks to the interesting character playstyles and the different Battle Styles. This is especially true if you’re a big fan of the anime, as you’ll enjoy seeing the characters of the Naruto universe going head to head with their signature moves, and playing through the story chapters.