The Difficulty with Difficulty (Or, How I Learned to Stop Worrying and Love the Load Screen)

Ok, I have a confession to make: I kind of like easy games.

There, I said it. I’ve admitted it, I’ve let it out in the open, now time to let the healing begin.

I mean that literally, I need healing, my character is dying because I can’t seem to grasp the… crap, don’t get behind me… NO! Stupid ogre! Where the crap was my healer?!

We’ve all been in that situation before, right? Playing a game that we’ve looked forward to for a long time, only to realize that it might be just a little outside of our comfort zone when it comes to difficulty. Games like Dark Souls boast of being hard, of being nightmarishly hard. What kind of sick, sadistic, twisted malcontent would unleash such a maniacally evil game on the world? Oh, the Japanese? Nevermind then, carry on. 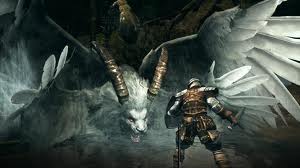 This is where I wet myself and cry for my Mommy.

While games like Dark Souls might get notoriety for being insanely difficult and more than accounting for their quota of rage-quits, they also are insanely popular. Gamers flock to them to test their abilities, to see just how good they really are. But, for the less adventurous of us, those games remain forever inaccessible, walled off from us by a towering barrier of difficulty, snobbery, and fear.

Yes, fear. I’m afraid to play games like Dark Souls because I’m afraid that it will prove what I already suspect about myself: that I’m a Bad Gamer. It’s a dark and deeply personal issue that manifests as a neurotic fear of real-time strategy games, Japanese RPGs, and almost anything by Capcom. In fact, as a further admission, I only started playing online a few months ago, with the release of Halo 4. Up until that point, the only multiplayer I’d ever done would be local co-op or competitive, never anything with the maladjusted, unwashed masses that lurk in the shadows of multiplayer lobbies everywhere online.

Of course, I’m being overly dramatic. No one cares what my Gamerscore is (except my best friend who likes to rub his in my face. I get it, you have more free time than me, now shut up!), and no one cares if I don’t play online with people I don’t know. But I care. I feel incomplete knowing that I’m not as “gamer” as other people. And I know that I’m not the only one. There’s hundreds of us Bad Gamers all over the place!

In fact, there’s enough of us out there that developers are looking at new ways to make their games easier for everyone to play. Mass Effect 3 offered three styles of gameplay, one that put more focus on the narrative, one that put more focus on the actual combat, and then a middle ground. Seems like a good balance, but even then, people who played on certain difficulty levels missed out on some of the gaming experience. More people got to play the game because it was scaled to their experience level, but at the same time, they missed out on the full experience.

Finding a good way to balance the difficulty of games has been an issue for decades. I remember (not too) fondly of getting a game over screen every single time I got to Metropolis Zone of Sonic 2. I just couldn’t get through that stupid thing. But we, as Bad Gamers, are used to the Game Over and Reload screens by now. They are our friends. In fact, I always love seeing how a game handles a Game Over. Will it taunt my bad luck and daring me to do better, or will it mock my incompetence and make me want to hurl the console out the window in to the street, hopefully through someone’s windshield? I don’t know, it’ll be a surprise! 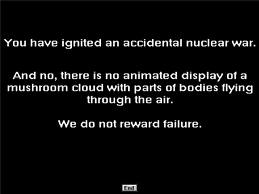 But why do we Bad Gamers want to play games that are beyond our ability? Why subject ourselves to the constant pwn-age from more experienced players? Why sit and try the same level twenty-five-billion times before finally looking in the guide and finding out we were going backwards? Because we want to play the fun games too! Let us join your club, cool kids!

In truth, we play them because we want to, abilities (or lack thereof) be damned. Maybe we want to see if we’re actually any good, or just because we’ve heard good things about a game and want to experience the world that it takes place in. Sometimes, we don’t give a crap if a game’s too hard, it’s just very appealing to us, so we’ll subject ourselves to the frustration.

But the question is: do developers owe it to us to make games easier so that everyone gets the same experience, or should the people playing on higher difficulty get greater rewards? I turn to my favourite franchise for example: Halo. Specifically, Halo 4. There are four difficulty levels to choose from, Easy, Normal, Heroic, and Legendary. Add to that the various skulls, which you can activate to add extra “perks” (such as tougher enemies, less ammo, etc) and there’s a little for everyone. If you choose to play multiplayer, the servers (in my experience) usually do a decent job of getting a balanced party together. The difficulty comes from ammo and equipment drops, enemy numbers, and enemy intelligence. An easy and straightforward way of handling the difficulty settings.

But is that necessarily a bad thing? Shouldn’t the better gamers be rewarded, while the Bad Gamers just get the standard experience? It’s a question that has no easy answer. In the old days, the people that could complete Super Mario Brothers or Sonic the Hedgehog or any other of the slew of cartridge games that existed that had no means to save your game were rewarded with actually being able to beat the game. The rest simply enjoyed the time we played before the inevitable Game Over screen. It used to be that the sense of accomplishment was enough reward for gamers.

Ah, the good ole days, right? Now, we get achievements/trophies, bonus levels, extra goodies, and the all-important Gamerscore. When anyone can look at my Xbox live profile and see that I have only a third of the achievements associated with any given game, it gives me impetus to try to get the rest, regardless of how insanely hard it is to get them. Chances are that I will not get the achievements associated with completing Halo 4 on Legendary with all skulls on, nor will I ever hit the level cap of multiplayer, nor will I finish even a Heroic level playthrough without rage-quitting at least half a dozen times while cursing my ineptitude and poor strategizing.

Personally, I think that the better you are at a game, the more you should be rewarded. When I see people with insane achievements and stats next to their profile, I know that they’re proud of those, as they worked hard for them. Just as I am proud of my not-all-that-impressive list of achievements, I still worked hard for them, and I have no problem admitting that.

Of course, the question of how to handle the difficulty of a game haunts developers. They don’t want to make the game so easy that a newborn can beat it, but they don’t want to make it so hard that only someone with the reflexes of a ninja get to see the credits. But even if they err too far to one or the other, chances are that, as long as the gameplay is fun, people will still flock to it, Bad Gamers and Amazeballs Gamers alike.

So, developers, don’t worry about making your games too hard or too easy. Make them how you want to make them, and the gaming community will respect you for it. While I probably won’t play Dark Souls unless I’m feeling particularly masochistic (or drunk), I still respect the developers for making a game the way they wanted to, and if they scare off some potential players, so what? Those players will eventually either get over their fears and play it, or never care enough to try.

And to all of my fellow Bad Gamers out there, don’t worry. No one cares what your Gamerscore is. No one cares if you’re level 1 or level 72. No one cares if you can beat Castlevania with your eyes closed while wearing thumbscrews. No one cares if you have to play a game on normal or easy. And don’t feel bad about not getting that neat little bonus for playing through the game on the hardest difficulty with all of the challenges. Play the game. Enjoy it. And when you beat it, just conveniently forget to tell your friends the difficulty level you beat it on. After all, they probably did the same.

For now, though, I have to get back to my game. The reload screen is over, and I have an ogre to kill. 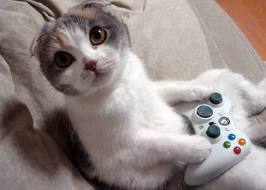 He…he came out of nowhere!